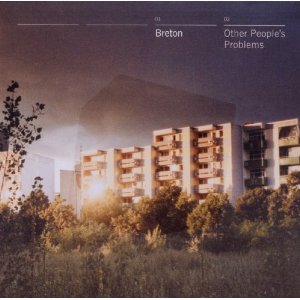 Within the first few sentences of the press release for Breton’s début album there’s mention of subversive art collectives, field recordings and the disclosure that they are indeed named after so-called ‘father of surrealism’ Andre Breton. So far, so WU LYF. It all starts to sound a bit ‘band that works better as a concept than an actual entity’.

Delve further and more ammunition makes itself evident. They all apparently live and work together at their creative HQ The Lab, a disused bank in Kennington, and their music is an interpretation of the Surrealist game The Exquisite Corpse. If nothing else, it shows that Other People’s Problems doesn’t lack ambition, demonstrated further by their decision to record at Sigur Rós’ own studio in Iceland.

It’s perhaps fitting then that from the outset the ensuing album comes out all guns blazing in a wall of towering, swaggering confidence. Opener Pacemaker begins with a recording of a subway car and then gives away to stabs of strings and drums that resemble artillery shells. Managing to be simultaneously confident and menacing, not to mention slick and gritty, it suggests there might be something genuine behind the façade.

The skittering, staccato Electrician and relentlessly driving, focussed Edward The Confessor continue the theme, both oozing an attitude that suggests hesitancy and uncertainty are both alien terms to mastermind Roman Rappack and his band of merry followers. Both use (as does the rest of the album) samples of arrangements created by Hauschka to create a mini film score, which was in turn then chopped and moulded into the collective’s own artistic vision. It’s this use which gives the material a genuine sonic depth which opens up upon repeated listens.

The album’s mid-point shows a degree of variation, with the mis-step of Rakes sound-alike Wood And Plastic giving way to Governing Correctly, sounding as it does like a lost Hot Chip track – albeit one that comes from an altogether darker, more mysterious place than its siblings. Throw in huge, festival-ready singalongs such as Interference and Jostle and you’re left with an accomplished, fully formed sonic arsenal.

While their vision may to many appear decidedly singular, the music itself is highly accessible and polished, and comes with a sense of being a carefully considered, fully fledged complete package. If there’s a chink in its armour is that the prevalent confidence has resulted in a record that hardly lets up in a relentless aural barrage. Beats pound, strings stab, and walls of vocals ebb and swell. It’s never a record that, though nuanced, can realistically be called subtle. But in producing a record of surprising depth Breton have avoid the trap WU LYF fell for of creating a band that worked far better as a PR/marketing stunt than it actually did as a band. Perhaps, if anything, this is a cautionary tale to not allow press releases to cloud one’s judgement.