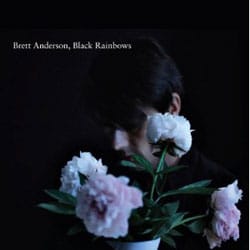 The art of the male solo album – especially if you’re in/were in a respected band – can be difficult to get right. You only have to look at Buzzcocks’ Pete Shelley or Magazine‘s Howard Devoto to see how solo work can disappear without trace, destined to be curios for diehard fans. In recent times the same can be levelled at all of The Strokes, and The Libertines‘ Pete Doherty and Carl Barat. In fact, arguably the only artists to have made it work are Richard Hawley (and let’s be honest, how many people buying Hawley’s records conceivably remember The Longpigs?) and Jarvis Cocker (who’s somehow managed to adopt the role of music’s equivalent of Stephen Fry in the national treasure stakes).

It’s a ring into which Brett Anderson feels the need to throw his hat occasionally. Although he already has an enviable back catalogue with assorted incarnations of his band (as shown by the successes of the Suede reissues and reunion shows), Black Rainbows is his fourth solo outing. Does he really have anything left to prove?

Unsung sets the tone with an enviable sense of ease. Big, bold and confident, on it Anderson croons “life is your love song, unsung” while strings sweep and swell, giving the song an undeniably impressive, effortless grace. Lead single Brittle Heart meanwhile manages to join the dots between Head Music-era Suede singles such She’s In Fashion and Everything Will Flow and Elbow‘s One Day Like Today. As with Unsung, it demonstrates that Anderson remains confident in his continued abilities as a songwriter. A strong opening trio is completed via the instant and accessible Crash About To Happen.

But it’s here that the record starts to fall over somewhat. While it’s easy (or lazy) to draw comparisons to Anderson’s former glories, there are times when the album doesn’t help itself. Ignoring track I Count The Times – which appears to have half-inched its chorus straight from All Saints‘ Pure Shores – any of The Exiles, Actors, or Thin Men Dancing could’ve been lifted off a late-period Suede record. That said, that’s not always a bad thing – Actor sounds like the galloping lost single, at once familiar and new.

There are still some gems to come though, aside from the opening trio. The percussive, melodic House Of Numbers and plaintive, beautific and haunting album closer Possession demonstrate that Anderson still has a knack of pulling a genuinely mesmerising composition out of the hat at a moment’s notice.

This album was a risk that Anderson didn’t need to take, so the question remains if he’s succeeded where others have failed. It at least leaves more questions than answers. Will it generate mainstream appeal for Anderson or will it remain a curio for die-hard Suede fans? Does he have it in him to make another solo record? On the basis of Black Rainbows it’s hard to say. While a good half of the album demonstrates a genuine songwriting nous, other elements hint at a mere rehashing of old Suede ideas. More’s the pity, as the opening three tracks alone are worth the price of admission and deserve widespread recognition, and when the album’s firing on all cylinders it’s a joy to behold. It has to be said, however, that it’s hard to see the release as a whole do much more than emulate Albert Hammond Jr‘s solo endeavours, for this is pleasant yet inessential stuff.