by Steven Johnson
published: 7 May 2016 in Album Reviews
Tweet 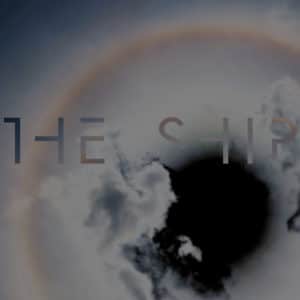 “Ambient Music must be able to accommodate many levels of listening attention without enforcing one in particular; it must be as ignorable as it is interesting”. This quote by Brian Eno closed the album notes to Music For Airports, his 1978 album that was to define all of his future music. The Ship, however, is quite far removed from such sentiments, being a startlingly different piece of work that demands close, unswerving attention.

We last heard from him in 2012 on Lux, an album that stuck to a classic idea of what Eno’s music should represent, a collection of ambient pieces designed to be played in art galleries and airport terminals. Looking slightly further back, Small Craft On A Milk Sea, his 2010 collaboration with Jon Hopkins was a solid album that despite moments of promise never really succeeded in fully integrating their respective strengths. Set against this relatively faithful background, The Ship – with its strong lyrical themes, spoken word interludes and unanticipated musical diversions – sounds all the more remarkable.

It’s an album that works on different levels, both from a thematic and musical perspective. At its most literal it is a concept album that positions itself in that period of time at the start of the twentieth century defined by the First World War and the sinking of the Titanic, dwelling on the fallibility, vulnerability and weaknesses of mankind.

The 21-minute title track opens in relatively safe Eno territory, still and calm, recalling past landmarks like Apollo and On Land, but then we hear Eno’s vocals and things begin to change. As well as a response to these historical events it also seems to be an exploration of the possibilities of the human voice. The way in which Eno’s own voice undergoes a slight digital rendering is key and helps the lyrical messages settle alongside the discreetly growing electronic manipulations that surround. Other vocal fragments drift in and out of focus and nautical sounds enter the mix – the irregular chiming of bells in the wind, the stretching and tautening of ropes. It’s an eerie yet strangely absorbing opening that also recalls the recent music of Ian William Craig.

The rest of the album comprises a trio of interlinked but very different pieces under the Fickle Sun name. Fickle Sun (i) is by far the most interesting track musically. It unfolds in painstaking, experimental style, Eno continuing to sing in increasingly poignant, strained tones about the darkness engulfing Europe at that time, while fizzing electronics and background chatter play out alongside. It is interrupted by a series of dramatic, low-end brass strikes that impress a primal power into the heart of the album and as it progresses it strays towards the realm of contemporary classical music (it’s hard not to mentally acknowledge Gavin Bryars’ iconic and similarly left-field Sinking Of The Titanic at this point).

The closing two tracks take a relatively more straightforward form. Fickle Sun (ii) is an abstract spoken word piece set to a quiet piano backdrop, delivered (slightly unexpectedly on the surface) by actor/comedian Peter Serafinowicz. The resounding Englishness of his accent seems to bring the subject matter closer to home, away from the chaos of the respective scenes. The shift from what came before is pretty stark, like suddenly being transported to a radical new scene in a film, or opening a fresh new chapter in a book. Fickle Sun (iii) closes the album, essentially a hazy, faithful cover of The Velvet Underground’s I’m Set Free.

It’s a very different type of album but the boldness, change of direction and sheer level of high musical attainment makes it hard not to compare it to another album released this year by a contemporary of Eno, namely Blackstar by David Bowie. The subject of what music seminal artists create in an environment where their influence continues to abound is an interesting one – some may settle comfortably into the familiar surroundings they’ve helped to establish – but this doesn’t apply to Eno. The Ship proves he has more ideas than ever, and shows there’s still plenty left to be achieved in music.