by Neil Dowden
published: 7 May 2012 in Album Reviews
Tweet 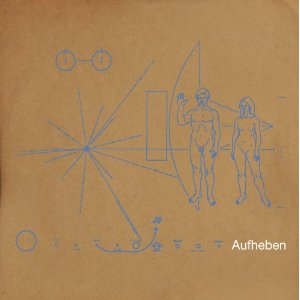 The Brian Jonestown Massacre have been on a helluva trip with their take on ’60s West Coast psychedelia over the last 20 years. Though their lovingly created retro sound can come very close to plain pastiche, the band has also experimented with an eclectic mix of rhythm and blues, folk, country, electronica, and even house beats on their last album, 2010’s unsatisfactory mish-mash Who Killed Sgt. Pepper?

Their 13th studio album Aufheben, recorded in Berlin, returns to their more relaxed and chilled out persona, with an Eastern twist, where Western bohemia meets transcendental meditation. The title comes from a German word with contradictory meanings, including “abolish” and “preserve”, reflecting the creative tension of invention and homage which characterizes Brian Jonestown Massacre’s musical output.

The one constant feature in this aural kaleidoscope and an ever-changing line-up is the offbeat vision of main man Anton Newcombe, though here original member Matt Hollywood returns to the fold after an 11-year absence, even if on guitar rather than bass or vocal duties. Newcombe is the driving force as always on this self-produced album, which meanders along very pleasantly without really getting anywhere – lost in a hippie haze, you might say, where the journey is full of beguiling distractions.

Aufheben opens strongly with the instrumental Panic In Babylon, when dawn birdsong is pierced by the sound of the Indian “trumpet” nadasvaram, leading to a hypnotic drone with subtle variations on a repeated motif, and ending with a cock crowing. This is followed by the more upbeat Viholliseni Maalla, featuring vocals by Eliza Karmasalo in Finnish, their obscurity compensated by an attractively dreamy ambience.

After a few tracks of characteristically BJM mellifluous overlapping vocals, shimmering guitars and rattling tambourine, fading out wistfully, the Eastern influence eventually returns in Face Down On the Moon, a pastoral flute-driven instrumental piece with sitar in the background, offset by some vigorous drumming to give it some urgency.

Stairway To The Best Party is an unashamed tribute to Paint It Black by the Rolling Stones (of course BJM are named after that band’s ill-fated second guitarist), though with extra feedback and distortion in a more spaced out, even borderline psychotic, fashion, closing with a forbiddingly extended hum. Waking Up To The Hand Grenades interweaves a beautifully bucolic melody, in the style of Ruby Tuesday, with a pumped up driving beat.

Blue Order New Monday (another example of Newcombe’s playful musical referencing) is nothing like the British band’s synth dance-pop anthem, but uses strings and piano to beguiling effect to bring the album to a suitably dream-like close.

As usual, Newcombe’s laid-back vocals are set well back in the multi-layered instrumental mix, but even when you can hear the lyrics they are pretty indecipherable anyway – you just have let yourself go with the mood-flow of the music. The Middle Eastern/Indian input is interesting, but even though the sitar features throughout the album more could have been done to forge the multicultural elements into a cohesive whole. Some of the tracks seem a bit unfocused and feel as if they end randomly but then the band have always been about weaving a big tapestry of sound rather than constructing individual chunks. Aufheben may not be vintage BJM but it’s still pretty groovy stuff.