Bright Eyes – Down In The Weeds, Where The World Once Was 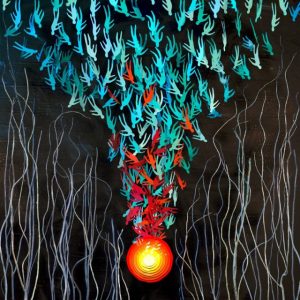 It’s been a long nine years since Bright Eyes released The People’s Key, and then embarked on a lengthy “unofficial hiatus”. Conor Oberst hasn’t exactly been slacking since – he’s recorded three solo albums, a second Desaparecidos record, and formed Better Oblivion Community Center with Phoebe Bridgers – but seeing him reunite with Mike Mogis and Nate Walcott feels like something of an event.

For despite Oberst’s many side-projects, there’s a scope and ambition to Bright Eyes’ work that you don’t hear in many other places. As befits its title Down In The Weeds, Where The World Once Was, can be bleak in parts, and many weighty subjects are tackled. In the years since the last record, Oberst’s brother has died and his marriage has collapsed. Add that to the general global tensions that seem to have become the new normal this year, and we have an album that seems, at times, to be a soundtrack to troubled times.

However, in common with much of Bright Eyes’ best work, this isn’t an inaccessible record at all. Apart from the outlier of the woozy, dreamy opener Pageturners Rag (an instrumental of eerie waltz piano, and spoken word samples from Oberst, his ex-wife Corina Figueroa Escamilla and his mother), it’s business as usual – although Oberst’s vocals seem to be, if possible, even more world-weary than before as he contemplates the burning hellscape that the world seems to be turning into.

Because the world is an even bleaker place than back in 2005 when Oberst sung of the President talking to God. There are no explicit digs at Donald Trump on Down In The Weeds, but rather a general disgust at the state of the world – Mariana Trench feels like the audio equivalent of Howard Beale’s famous breakdown in the film Network, with its talk of markets crashing, “the big one” hitting and a world where “selfishness is currency”. It feels almost cathartic when Oberst pronounces “I’m sick of it, I’ve had enough, I’m ready for the war”.

There are some beautiful arrangements throughout the album. Bagpipes appear on the gorgeously intense Persona Non Grata and sound surprisingly palatable, and there’s a majestic swoop to Calais To Dover that make it one of the best Bright Eyes songs to date. At other times, they keep it simple, such as the short, piano led Hot Car In The Sun which becomes almost desperately sad to listen to – the way Oberst’s voice almost breaks when he sings “chopped the celery and made the soup, didn’t have much else to do – I was dreaming of my ex-wife’s face” will stay with you for a long time.

Although Oberst is understandably the focal point, it’s important not to dismiss Mogis and Walcott’s contributions as well. The wistful trumpet on Stairwell Song turns out to be just a precursor to a beautifully orchestral section that swoops in towards the end to take the breath away, while To Death’s Heart (In Three Parts), a duet with Jesca Hoop, is as complex as its title may suggest, a weighty mediation on divorce, the Paris terrorist attacks (“there’s bodies in the Bataclan”) and, oddly enough, Pink Floyd.

By the time the album’s 54 minutes have drawn to a close, you feel exhausted but in the best possible way. Oberst has obviously had a hard time of it over the past few years, but these songs are the best possible way of getting it out of his system. Or, as the man himself puts it on Dance And Sing: “How imperfect life can be, now all I can do is dance on through.” Which, really, is all any of us can do – and these are the songs to provide that soundtrack.