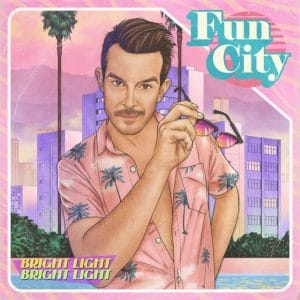 Bright Light Bright Light is the performance nom de plume of transatlantic electro-pop gem Rod Thomas. Born in Neath, this sometime small town boy is now based in New York and has enjoyed success and acclaim with his bittersweet and optimistic brand of pop injected with nu disco.

His first album Make Me Believe In Hope was part tales of heartache, part optimistic bangers underpinned by a divine ’90s pop blueprint. His sophomore Life Is Easy was a cathartic journey with themes of loss, empowerment and new beginnings, with a wonderfully optimistic and cinematic feel, featuring a beautifully subdued Elton John on I Wish You Were Leaving. Third album Choreography was filled with his now trademark hooks and harmonies, a slick tribute to Kim Cattrall’s dance sequence in Mannequin (Symmetry Of Two Hearts) and manifold collaborations from Elton John, members of Scissor Sisters, Mykal Kilgore and Alan Cumming.

It’s hardly surprising then that Rod’s new album Fun City, pitched as a love letter to the LGBTQ+ community, should feature an impressive array of collaborations from artists and allies such as Erasure‘s Andy Bell, Caveboy, Jake Shears, KAYE, Donna DeLory, Niki Haris, Mark Gatiss and Sam Sparro. The album opens with Touchy, a catchy and sensual synth-driven duet with Brendan Maclean. The thumping I Used To Be Cool could have easily been lifted from Jessie Ware‘s post-disco masterpiece What’s Your Pleasure? and You Make It So Easy with Sam Sparro is a funky slice of summer sauce.

The mood shifts somewhat as Good At Goodbyes begins as a beautiful torch song, a duet with some euphonic and affecting harmonies from Andy Bell which then builds into an uplifting dancefloor anthem. Sensation is a rousing pop banger with Jake Shears that celebrates the euphoria and relief when finally connecting with community kinship. These Dreams is a bittersweet and heartfelt duet with The Illustrious Blacks urging time and opinions to shift. This Was My House is a retro house delight that could be blasting during an episode of Pose with its echoes of Madonna/Shep Pettibone collaborations, such as Up Down Suite and Thief Of Hearts, as the narrative envisions the erosion of rights to safe spaces and freedoms that Trump’s America seeks to revoke. Having Donna DeLory and Niki Haris on backing vocals is inspired, and the track’s title could also serve as a nod to Madonna’s This Used To Be My Playground.

Amongst the many pleasures here, the album’s standout is the euphoric It’s Alright, It’s Ok, a stirring duet with Caveboy celebrating freedom of gender expression, and the electro-shimmer is buttressed by a bassline echoing Ain’t Nobody by Rufus and Chaka Khan; the video featuring drag perfomer Glow Job getting ready for a solo show on a rooftop is just divine. Next To You starts off all Buffalo Stance by Neneh Cherry, then transcends into a gorgeous mid-tempo ballad that could be mourning a distant lover or an excluding community, with Mark Gatiss coming over all Jimmy Nail in Ain’t No Doubt. The album closes with Saying Goodbye Is Exhausting, an affecting ballad featuring mournful saxophones and an inspired turn from Justin Vivian Bond.

Thomas’s music endears unhindered by tunnel vision perspectives, and is engendered with a sense of inclusivity. His Saturday afternoon Romy & Michele’s Tea Dance parties in Brooklyn and Manhattan attract a wide audience, as he spins requests from both die-hard fans and the curious. The underlying message of Fun City is that everyone should feel welcome in the place chosen as home and that those who seek to exclude need to leave themselves at the door.