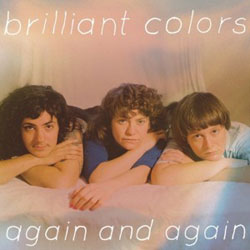 It’s curious to wonder what would’ve happened if Brilliant Colors came to prominence a few months before The Pains Of Being Pure At Heart put out their fuzzy-warm debut. Maybe the Colors would’ve been the revivalists while the Pains would be the copycats, and fringed-headed teenagers would crush on one of the band’s three San Franciscan ladies instead of ogling over Peggy Wang.

Things could’ve gone a lot different for them, but unfortunately their signage and C86 adoration comes at a time where the market is strangely saturated with dizzy, crystal-strewn guitar-pop. Their second record Again And Again runs its course in a breezy 28-minute shuffle, and for some people, that might be all they need. For others it couldn’t be more needless.

Brilliant Colors aren’t out to prove any points; they wear their influences on their sleeve and they have a certain self-awareness that most of the tunes in their repertoire sound the same. Things are more polished since the band’s first LP, but the core songs retain that particular incandescence that belongs to only the most bright-eyed of indie pop. Guitar sounds rosily eroded, the drums are tussled and full of happenstance fills, and Jess Scott’s voice is always dreamily reaching for notes just out of her range. It comes together in winsome, but annoyingly disengaged fragments; the songs are peppy, sunny, and generally enthusiastic, but there’s a near-universal lack of substance. Nothing here coalesces into anything truly memorable; in fact the only thing that sticks is the timeworn aesthetic. The record’s highlights, Hey Dan, Value Lines and Cult Face only earn their notoriety because they’ve got enough of a propulsive blur about them to keep the listener from getting too distracted.

There are some obvious things to detract from a band like The Pains Of Being Pure At Heart – they’re miniature, cutesy, and maybe a little too borrowing for purists, but at least they can write some sticky melodies. Brilliant Colors can’t even manage to do that. Their impression is clear, but the soul, and even the primary reason why this sort of music was great in the first place, is coldly removed. It makes for a slightly uncanny listen, like a collection of all the filler tracks from ’88 twee. It’s pretty natural to assume the band is happy to be on Slumberland, but after spending a fair amount of time with Again And Again the conclusion isn’t that the band isn’t unlucky or poorly-timed or pooled in with an exceptional legacy and a talented group of peers, it’s just that they might not be very good.