Bring Me The Horizon – Sempiternal 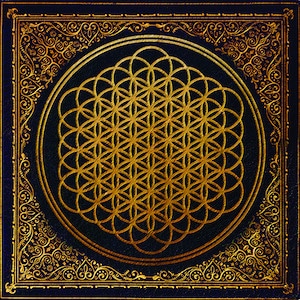 A band operating at the top of their game is a fearsome sight. And very few rock groups right now can lay claim to such a degree of ascendancy as Sheffield metallers Bring Me The Horizon. 2010’s outstanding There Is a Hell, Believe Me I’ve Seen It. There Is A Heaven, Let’s Keep It A Secret laid the foundations, building on the muscular steeliness of their first two records to deliver a towering achievement of an album. Blending high-octane riffs, a peerless sense of scale and chillingly beautiful ambient elements, There Is A Hell… felt like the kind of artistic pinnacle most acts only reach once in their career.

But here’s the thing. Follow-up Sempiternal – it means “eternal, everlasting” – is every bit the worthy successor fans could have hoped for. Lead single Shadow Moses stands as a powerfully demonstrative statement of intent, while opener Can You Feel My Heart offers a juddering, mechanistic backdrop of uneasily discordant wheezes as Oli Sykes unleashes a volley of back-of-the-mind fears that encroach like a flock of circling vultures: “The higher I get, the lower I’ll sink / I can’t drown my demons, they know how to swim…”

Worries familiar to any musician, for sure – but here they go unfounded, because Sempiternal leaves no room for error, choosing instead to crush it beneath an iron first and bury it deep below layers of richly-constructed production. That Sempiternal feels like an ambitious album goes without saying – but crucially, it believes its own ambition, and feeds off it. This is no posturing stab into the dark; rather, each track here feels like a methodical building block; elevating the band and their prodigious talent ever higher on the staircase of rock stardom.

Mid-album, new single Sleepwalking and the livewire pulse of Go To Hell, For Heaven’s Sake verge on Linkin Park territory, underscored by sleek synthetic flourishes and boasting the kind of meaty fullness of sound you come to an album like this for. Likewise, Empire blasts into an outro of Rammstein-esque canned-chants, militaristic howls bleeding away into desolate plaintiffs from Sykes that “the wolves are at my door”. Throughout, a palpable urgency keeps things moving forward at a ruthlessly unforgiving pace – the listener dragged in chains behind the Bring Me The Horizon steamroller; every jolt and twist in the journey carved into the consciousness. And it feels glorious.

Antivist delivers a withering salvo of expletives to make even the most liberal of tongues blush. But unlike, say, recent efforts from Bullet For My Valentine, they don’t feel like cheap, adolescent shots – instead they drip with a venom and furiousity so distilled, it could cut glass.

Hospital For Souls makes for an impassioned closing act for the album – a sprawling epic of a number gorging on its own size, burning white hot with the accumulated anger and viciousness of the album as a whole. And for all this, the lasting impression left by Sempiternal is of a terrifically agile, lean album – though this sees it perhaps lacking some of the more overarching, almost baroque grandeur of its predecessor. There’s scale and drama here aplenty, but it comes in meteor sized slabs as opposed to the meticulously orchestrated, almost classically inclined compositions on the band’s 2010 effort.

Whether Sempiternal actually betters There Is A Hell… is a difficult question to answer. It’s certainly slicker, at any rate; infinitely more accessible and offering melodies more readily primed for daytime radio audiences. If There Is A Hell… represented the raw materials dug up fresh from whatever illustrious mine Bring Me The Horizon draw from, then Sempiternal is that same material forged into a finely honed tool, replete with a razor sharp cutting edge. As two halves of the same equation, both There Is A Hell… and Sempiternal stand as one of the landmarks achievements of contemporary British metal. With all the ingredients for success laid bare, Sempiternal comes as the lightbulb moment – the clicking into place of every cog and spring, Bring Me The Horizon more than ready to accept the gauntlet thrown to them. Sold out arenas surely now beckon.