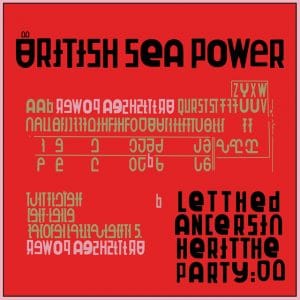 There have been few louder pro-European voices in rock’n’roll over the years than British Sea Power’s: in 2004, to celebrate the entry of Czech Republic into the European Union, the Brighton-based sextet released a Czech language version of their track A Lovely Day Tomorrow, while 2008 saw them showcase third album Do You Like Rock Music? with a performance at the Embassy of Czech Republic. Stirring single Waving Flags waved the flag for multicultural bonding and boozing (“Are you of legal drinking age? On minimum wage? Well, welcome in…”). The band’s entire back catalogue is rich with allusions and references to great European minds, artists and music: in a memorable case of “don’t meet your heroes”, a collaboration with Krautrock cranks Faust ended in some post-show fist throwing.

It was always going to be interesting, then, to hear this most outward-looking act’s response to last June’s Brexit referendum result. Though recorded last year, it’s poignant and poetic that Let The Dancers Inherit The Party finally appears mere days after Theresa May’s triggering of Article 50 signalled the start of the UK’s sorry withdrawal from the EU. In 2011, frontman Yan suggested that “the worst financial decision” the band ever made was calling themselves British Sea Power as everyone thought they were “imperialist twats”. “When we named ourselves, Britain seemed to be moving on to a bright future. Now it’s just gone back to the 1980s and it’s a bit embarrassing,” he mused. Post Brexit, with the clocks set to go back further still, that sense of embarrassment must be even more palpable.

The upheaval and uncertainty apparent across the country in recent times has also been evident within British Sea Power themselves, with their parting of ways with Rough Trade after more than a decade coinciding with a period of consolidation and looking back. Their debut The Decline Of British Sea Power – one of the most eccentric, immersive and magnificent rock records of the last 30 years – received the elaborate deluxe reissue treatment. Sea Of Brass (songs rerecorded alongside brass bands) and From The Sea To The Land Beyond felt like very Sea Power-ish ways of tackling their Greatest Hits. The latter, a soundtrack to a film documenting Britain’s changing coastline featuring exquisite, evocative orchestral reworks, may well go down – along with The Decline… and their wildly exciting, erratic early gigs – as British Sea Power’s defining statement.

When they felt ready to record their first album of all new material in four years, the band turned to their famously devout fan base and crowdfunding. Pleasingly, recent events appear to have galvanised them, making Let The Dancers Inherit The Party easily their most spirited release since the Mercury-nominated Do You Like Rock Music?

Named after a biography of Czech writer and prankster Jaroslav Hašek, who satirised the ineptitude of authority figures in his book The Good Soldier Švejk, Bad Bohemian is a punchy BSP opener in the vein of Who’s In Control and It Ended On An Oily Stage. “Don’t let us die while we are still alive,” Yan sings in his persuasive, part-whispered voice, as bass, guitars, drums and synths build up ahead of stream. The prominence of synths is the most noticeable sonic evolution on this record – lending the likes of Bad Bohemian, International Space Station and The Voice of Ivy Lee a thrilling sense of immediacy and forward motion.

Bad Bohemian is just one example of the band using figures and references from the past to comment on the present. On the fantastic The Voice Of Ivy Lee, they give the current post-truth world a broadside by evoking Ivy Lee, a founder of modern public relations who worked for, among others, Charles “Lindi” Lindbergh (previously eulogised in live favourite The Spirit of St Louis): “Kings of propaganda, won’t you take another look at all the things you’ve done.”

Praise For Whatever and Electrical Kittens don’t sound heavy, but certainly feel it – British Sea Power creating brilliantly ominous and oppressive soundbeds over which a despondent Yan flatly delivers lines like “here comes the war” and sings “we’ll all hold hands as the radio plays, say a little prayer for halcyon days… and hope that we’ll be safe.” Containing the phrase that gives the album its title, Praise For Whatever posits that in “a world of extremities” and falling missiles there is a need for a new, more effective form of communication – a dancing with rather than a glowering at.

On International Space Station, Yan delivers the verses with We Didn’t Start The Fire-style urgency before looking up longingly at the space station, all “celestial… beautiful between the moon and the stars”, as if it were an appealing relocation option. A more optimistic tone is struck on Saint Jerome (“hope beyond hope!”) and Don’t Let the Sun Get In The Way, a glowing pop song reminiscent of The Secret Migration-era Mercury Rev.

Keep On Trying is a misfire – when the track was sent out to radio stations, the words “Sechs Freunde” were added in brackets, presumably in a bid to reassure listeners they weren’t repeatedly chanting “sex friend!” at them. The vocal hook aims for a communal sing-along moment similar to No Lucifer’s rousing ringside refrain of “Easy! Easy!”, but comes off sounding goofy and awkward.

As ever, the reflective, sensitive contributions of Yan’s brother Hamilton provide depth and counterpoint. What You’re Doing’s chorus (“Don’t know what you’re doing to me, don’t know what I’m doing to you”) neatly sums up the ineffable, heartstrings-tugging quality that his tunes possess. Want To Be Free is the one moment on the record where the band sound genuinely broken, while closer Alone Piano, all creaking strings, reverb and subtly militant drums, creeps slowly and freely like ivy up a wall. It’s an elegant end to a record that marks a wholly welcome return to form.