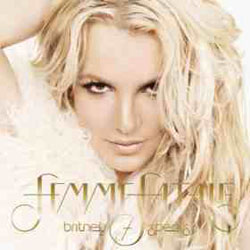 As Robbie Williams has proved, a troubled psyche and a tabloid-friendly private life are no barriers to being a successful pop star. Indeed, in an age of sanitised, clean pop, sometimes it’s even an asset.

So it is that we welcome Femme Fatale, Britney Spears’ seventh album in 12 years – quite an achievement for any manufactured pop star, let alone one who’s gone through a very public breakdown, had her suitability as a mother called into question, romanced a paparazzo and given herself the most famously unflattering haircut.

As ever with a Britney Spears album, Brizza herself seems to have had very little to do with it – a myriad of producer and writer credits litter the sleeve, but Britney’s name is not amongst them. Instead, we get a mixture of old names (long-term collaborator Max Martin), new names (Ke$ha co-writes one song) and the sadly inevitable (will.i.am, who continues his mission to appear on, and ruin, every pop album ever released).

What makes Femme Fatale a bit different though, is that all the songs here are aimed at the dancefloor. There are, thankfully, no mawkish ballads dedicated to her children – instead we get squelchy synths, beats, and even a little bit of dubstep at times.

And as ever with Britney, it’s wildly inconsistent in its quality. It starts off brilliantly, with Till The World Ends and Hold It Against Me sounding like genuine dancefloor anthems. The latter is particularly good – possibly her best effort since Toxic – with an uplifting chorus, a grinding bass and a quite brilliant breakdown which spreads some dubstep magic all over the place. Admittedly, Bogore or Skream won’t be seeking Britney out for any future collaborations, but it’s a welcome step forward for her.

Till The World Ends is equally good, if more traditionally Europop, while Trouble For Me has a superbly weird intro and Gasoline struts and pouts just perfectly. At its best, Femme Fatale sounds like nothing on earth – odd, strange pop music that’s totally different to anything normally heard on radio.

Yet, as ever, with Spears, when she’s bad, she’s absolutely horrible. Never the greatest of singers, her voice here has been Auto-Tuned out of all recognition, sounding robotic and emotion-free for most of the tracks here. Only on the closing Criminal does she even attempt to emote, and the results are painful to listen to.

Also, oddly for a woman whose entire career has been built on sexuality, her attempts at getting steamy succeed only in producing a cringe. The otherwise excellent How I Roll includes the eyebrow-raising line “you can be my fuck tonight” while Drop Dead Beautiful sees her swapping bizarre come-on lines with rapper Sabi – “your body looks so sick, I think I caught the flu” and, wait for it, “steam me like a pot of vegetables”.

Although she’s never been much of an albums artist, there’s an awful amount of filler. The dreadful will.i.am collaboration Big Fat Bass is probably the worst offender, but I Wanna Go and Trip To Your Heart all contribute to a general feeling of weariness when listening to the album all the way through.

At its best, Femme Fatale sounds like pop music from another planet. At its worst, it’s like being trapped in a lapdancing club with dead-eyed robot strippers. It’s never anything less than interesting though, and with everything that Britney Spears has gone through in recent times, perhaps we should just be grateful she seems to have come through it all relatively unscathed.