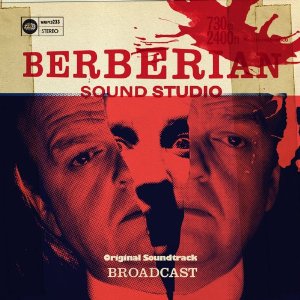 Peter Strickland’s Berberian Sound Studio, one of 2012’s finest films, recalled Francis Ford Coppola’s masterpiece The Conversation in its vivid, enthralling sound design. Listening to Broadcast’s soundtrack divorced from Strickland’s images, it becomes clear just how vital their music was to the strength and impact of the picture.

Strickland’s film concerns Gilderoy, a reticent, eccentric and introverted sound effects engineer who is drawn to work on an Italian horror film called The Equestrian Vortex. A nature specialist, Gilderoy intitially believes himself to be working on a film about horses but is shocked and unnerved by the horrifying story of the film, which involves mutilation, degradation, routine casual misogyny, murder and a ‘dangerously aroused’ goblin.

Much of James Cargill and Trish Keenan’s music provides the eerie or sinister atmospheres of The Equestrian Vortex – the film within the film, although there are also themes that provide resonances of Gilderoy’s former life outside the film studio – of birds and Box Hill. Casual listeners might be disturbed by the highly fragmentary nature of this recording, as it speeds through 39 individual tracks in almost the same number of minutes. The longest piece is three and a half minutes and the shortest a mere 26 seconds. Can this ever possibly work as a coherent listening experience outside the context of the film? That the album’s brief musical interludes are constantly punctuated with sound effects (yes, including that goblin) is a constant reminder of this work’s core function.

However, anyone familiar with Broadcast’s excellent last album, a collaboration with designer and musician Julian House (Broadcast and The Focus Group Investigate Witch Cults of the Radio Age) might suggest that it can. The approaches behind that album and this new work (House provided the film’s striking opening title sequence) are so similar as to suggest that this focus on short forms might have become a radical working method for Broadcast in the long term.

There are swirling, mesmerising themes which appear and later recur, whilst there are also moments of sinister abrasion (Found Scalded, Found Drowned). The echoes of previously heard themes, motifs make for a compelling examination of memory and experience as much as for an effective soundtrack. The concise nature of these sketches means that this is not a work preoccupied with developments within individual pieces, but rather with how development can be achieved cumulatively through fragments, the tiny drip, drip, drip of information eventually creating something potent and overwhelming.

For all the broken, disorientating nature of this recording though, Cargill is an expert with texture and mood. He uses drums to provide often jolting and unexpected impetus (the film’s main theme even swings). By way of contrast, the wide array of subtle, eerie and menacing woodwind sounds both hint at an innocence lost and portend mighty troubles still to come. Appropriately for a film that charts one man’s descent into a nightmare, the music has a strong psychological feel to it. The motifs claw their way into the brain and toy with the synapses. Sometimes it feels claustrophobic, albeit irresistibly so.

The word ‘hauntology’ will no doubt continue to be applied to this area of musical activity and, indeed, this soundtrack appears not only appropriately supernatural in tone, but also nostalgic for the pioneering days of the BBC Radiophonic Workshop. Whilst there are ghosts from the past here, Berberian Sound Studio also provides strong reminders of Broadcast’s unique and idiosyncratic sound – which could range from the icy and detached to the curiously moving.

Inevitably, this recording is imbued with an additional poignancy due to Trish Keenan’s tragic premature death in 2011. The key moment is Teresa, Lark of Ascencion, a beautiful piece in which Keenan’s voice is cut up and layered from all directions, creating a surrounding, enveloping effect – not just ascendant but transcendent. It not only highlights just how much one of last year’s most acclaimed albums, Julia Holter‘s Ekstasis, must surely have drawn from Keenan for inspiration, but also reminds us just what we have lost with her untimely passing.