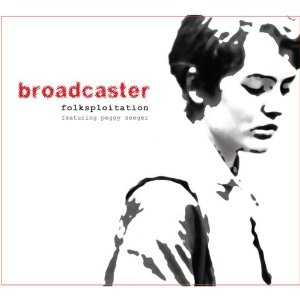 You grandmother is suddenly addicted to beats and samples. She pulls out a Korg, a drum machine, some pills and an echo machine, then starts recounting shattered stories from her life. It’s both unsettling and wondrous. It will never happen. But here is the next best thing: Peggy Seeger with Broadcaster.

Seeger released her first album, the wonderfully named Folksongs Of Courting And Complaint, in 1955. She’s not new to this game. But the approach that Broadcaster bring to her vocals on this record is striking. It’s not a new trick – Pet Shop Boys dusted down dear Dusty Springfield, Morrissey brought Sandie Shaw shuffling shoeless back into the spotlight and more recently Jack White lent some of his press profile to giving Loretta Lynn her due. But this combo are even further out of leftfield.

Seeger has lived an amazing life, one that saw her clash with the powers that be in her homeland and bring forth beauty with her husband Ewan MacColl. It was for her that MacColl penned The First Time I Ever Saw Your Face, which is recast on Folksploitation as driving music for the computer people of Tron, a pulsing Gary Numan-esque electronic meditation, Seeger a disembodied but still soulful voice from history vibrating the wires.

Bad Bad Girl, the opening track, sounds utterly vital, the kind of recasting of a classic that gets Quentin Tarantino’s blood up. Sounding like Bonnie stood alone without her Clyde, Seeger’s voice drips with menace and sex. She has a Catwoman slink as Broadcaster’s snarling guitars and outlaw-swagger beats stalk after her. It’s a hypnotic beginning to a slight but utterly compelling record.

The reggae-tinged Little White Grains ties a frightening metaphor for drug addiction with a riff that has you tapping your feet as the horror sweeps into your mind. The slight distance of Seeger’s vocal over the song at times brings images of humanity left far behind, recordings of a forgotten society playing out to an empty space ship drifting through deep space.

Those analogies may sound insane but this is one of those records that sets your mind off racing. Three, which couples electrics with what sounds like Seeger’s own banjo playing, is a smile creator, with burbling electronics bouncing against the joyfulness of her voice.

Annie brings dub and reggae tropes back into the mix, bouncing behind Seeger’s echoing tale of bruised romance. Welcome To The Neighbourhood continues the same clash of dark lyrics and intriguing beats, though it’s spoiled slightly by the inclusion of a British vocal sample that feels awkward. Until that point, no other voice beside Seeger is heard and the record would have been better for sticking to that.

Gone takes the feeling of being spaced out to its logical conclusion with lyrics about a space pilot and the most extreme feeling of loss – “a rocket pilot asked me/on a voyage to go…I just couldn’t say no…my daughter’s in the Milky Way/I’m exploring inner space”. The story could almost be a modern companion piece to David Bowie‘s Space Oddity and Ashes To Ashes, the female space explorer backed by strings and scratchy guitars giving her take.

Slight misgivings about Welcome To The Neighbourhood besides, Folksploitation is a gem of a record. It’s too short – seven tracks does not feel like nearly enough – but the attention brought to Seeger’s beautiful vocals is so welcome. Many musicians are gifted the label “legend” but she is definitely worthy of it, and this record brings her skill and grace into fascinating focus.