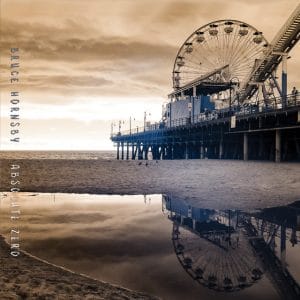 What a refreshing album this is. Bruce Hornsby may already be known for a willingness to explore musical byways, but even by his standards he has happened across something pretty special here.

Absolute Zero has its roots right back in the early 1990s, and the start of a long musical relationship between Hornsby and director Spike Lee. From it came a keen interest in musical ‘postcards’, short bursts of melody or harmony that paint a picture or set a mood in accordance with what is on screen. As Absolute Zero shows, these short but intense cells can form the building blocks for substantial songs that ultimately link together, creating Hornsby’s very own musical feature picture.

Key to the success of this approach is the input of New York chamber ensemble yMusic, whose presence enriches five of the tracks here. With them Hornsby has developed songs using a Thomas Newman-style minimalism, branching out into all sorts of interesting musical statements and pockets of emotion.

Sealing the deal is the production of Bon Iver’s Justin Vernon. With Hornsby he has clearly forged a close musical and personal understanding, for his finishing touches are the ideal complement to Hornsby’s voice and piano, capped by a guest slot on the wonderful Cast Off.

Vernon’s input is telling. The neat, lucid production touches range from attractive window dressing for Hornsby’s songs to the intricate detail of songs like Fractals, where syncopated piano loops chase each other around the stereo picture before steady drum beat brings them back in line. Meds is dressed with silvery string tremolandos that eventually sweep the song away, a dose of loveliness in spite of the singer’s oblique vocal line.

The collaborations go deeper than mere notes on the page, as this substantial song proves. Hornsby sings with telling emotion throughout, and Cast Off finds him musing on what appears to be the acceptance of a passive role in a relationship. “Is my back for stabbing?”, he asks pointedly. Reaching a kind of impasse, he agrees willingly to “be a cast off, be your discarded toy”.

There are some unconditionally positive songs here too. Voyager One is the pick, an irrepressible burst of positivity that has a groove bubbling with figurations from yMusic and with a heady vocal on top: “Let’s break out of our orbits, free of gravity’s effect, let’s leave our little planets fix relationships we’ve wrecked.” Hornsby’s world is an even brighter place for its existence.

Ultimately it is the quality of the songwriting that wins through here, though it cannot be appraised without appreciating the depth of instrumental work around the edges. Hornsby nails the difficult trick of bringing simplicity through complexity, the songs capable of standing on their own two feet with just a piano accompaniment, but coming alive when fully scored.

All of which means Absolute Zero is a rather wonderful record. Fresh and vibrant, it takes the strengths of the skilled musicians involved and builds on them to make songs of lasting meaning, with very different ways of saying “that’s just the way it is”, to quote his biggest radio hit. If that is all you know of Bruce Hornsby to date, begin to acquaint yourself with his music, starting with this uplifting and inspiring piece of work.