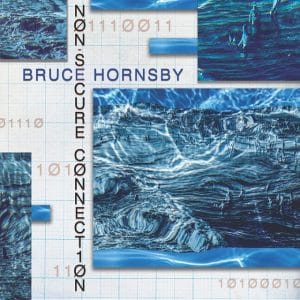 He may be 34 years into his pop music career, but Bruce Hornsby’s powers of invention have never been stronger.

Non-Secure Connection takes the bubbling creativity of last year’s wholly uplifting Absolute Zero album and runs with it, expanding on that record’s flirtations with dissonance and chromatic melody. It also casts the net far and wide with its subject matter, exploring the pros and cons of modern technology, civil rights and even the Darwinian aspects of Amateur Athletic Union basketball.

There are, says Hornsby, twice as many songs (three to one and a half) using his more oblique methods of composition, but the sense of exploration is heightened further by an amassed throng of collaborators, reprising some successful partnerships from last year. One of those songs, Shit’s Crazy Out Here, could be written yesterday in its relevance to today’s living. “I’m up and then I’m down, I’m in and then I’m out”, sings Hornsby to a jagged melodic profile.

Despite the guests, it is still undoubtedly Hornsby’s individual work, though the contributions from The Shins’ James Mercer, Jamila Woods and the late Leon Russell in particular make their mark, and Bon Iver‘s Justin Vernon once again helps out with production. My Resolve, the song with Mercer, exudes warmth and hope, dressed with a typically obscure but effective guitar riff. The song with Russell, Anything Can Happen, is particularly moving in its duet, recognising how “there’s always somebody out there in a darker place, no more tears to cry, no more time to waste”. It is a musical acknowledgement of the debts we owe, finished beautifully by silvery strings.

In the company of Woods and Vernon Reid, Hornsby tackles race issues on Bright Star Cast, a song drawing from a number of important historical sources. It stands out immediately with a stark electronic drum beat and low-slung funk, but its message is a positive one. “No matter what we do”, sings Woods, “I’m determined to feel fully human. Through unique, bold, arresting self-expression, we’ll create our own names, own songs, own style, our way to be free and wild”.

Both here and through the album the instrumentation retains appealing warmth, especially when the wind instruments are in play. Hornsby’s solo piano playing should also be complemented, less we take it for granted, prompting insistently at the start of The Rat King.

Non-Secure Connection needs – and deserves – several encounters before its treasures can be fully revealed. When they are, a record to stand beside his best achievements in recent years is the result. Hornsby is a fascinating and absorbing character, and the longer his creative surge continues the better.