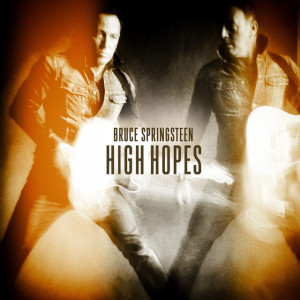 For someone whose sustained reputation mostly rests on his legendary relationship with his fans, Bruce Springsteen seems to have a surprisingly large number of disgruntled followers. Rather than mass excitement, the announcement that 2012’s imperfect but much loved Wrecking Ball would be followed promptly with a studio album constructed from new recordings of old songs, relatively recent outtakes and (horror of horrors) cover versions prompted consternation and rash judgement.

Some could not quite handle the bereavement that comes with the loss of Springsteen’s supposed ‘narrative or thematic arc’, common to most of his albums (although certainly not all of them – The River was pretty sprawling after all). Others saw the news as an unmistakeable sign that Springsteen is now an artist in decline.

The reality, of course, is much more complex. Springsteen may have partially confessed to his alleged crimes by describing High Hopes as ‘an anomaly’ and the roll call of contributors is probably the longest and most confusing of any Springsteen studio release. Yet High Hopes does demonstrate its own interior logic, not least in Springsteen’s emphasis on the importance of faith in desperate times (whether it be a Christian religious faith, or the fans’ continued faith in the Church of The Boss).

First, Springsteen’s selection of songs to re-record is judicious and timely. American Skin (41 Shots), initially performed live in response to the shooting of Amadou Diallo in New York City by four policemen in 1999, has recently assumed a new vitality following the acquittal of George Zimmerman in the controversial Trayvon Martin case. Its incarnation on High Hopes is less stark and more nuanced, a clear point where Ron Aniello’s production flourishes complement rather than dilute a really powerful song. The surging, incendiary electric take on The Ghost Of Tom Joad revisits Springsteen’s narrative in support of life on the margins in America, but this time sounds righteous and angry rather than plaintive and desolate.

Secondly, the covers (and relatively straight ahead interpretations have always been a key part of the E Street Band live experience) are excellent. Tim Scott McConnell’s High Hopes and The Saints’ Just Like Fire Would may be handled faithfully enough here, but they are testament to Springsteen’s core virtues as a performer. Both sound like they could have been written by him, to such an extent does he stake his claim on the words and the delivery. Both also at last capture something close to the extraordinary wall of sound created by the modern juggernaut E Street Band in concert (jubilant horn section included). High Hopes is a delightful, invigorating New Orleans shuffle, whilst Just Like Fire Would sounds strident, muscular and defiant. The closing Dream Baby Dream showcases Springsteen’s continued penchant for overproduction – but even the added synth layers and strings can’t quite puncture its emotive, mournful halo (it’s Suicide by way of Roy Orbison). When coupled with the video memories from the Wrecking Ball tour (including the tributes to the much missed Clarence Clemons and Danny Federici), the poignancy is overwhelming.

Elsewhere, there are some great recordings rescued from the vaults. Down In The Hole, most likely an outtake from The Rising, is haunting and evocative, both revisiting the linear groove from I’m On Fire whilst also subtly subverting it with delicately plucked banjos, unexpected rhythmic shifts, eerie backing vocals and carefully interwoven effects. Hunter Of Invisible Game is a rare Springsteen song with a waltz feel, continuing his recent preoccupation with Irish folk sounds and with some delightfully surrealist, allegorical and poetic Bob Dylan–esque lyrics. It’s certainly hard to see how this could have sat comfortably on any of Springsteen’s 21st century albums, but it’s a very welcome moment of reflection and imagination here.

Perhaps even more thoughtful, and certainly more starkly real, is The Wall. This recasts the beautiful melody of Shenandoah into a complex and moving song paying tribute to old New Jersey friends who never returned from Vietnam. The rhythm section is appropriately restrained and unobtrusive, Springsteen’s best storytelling voice right in the foreground. There’s also a moving organ solo contribution from the late Danny Federici.

The album’s middle section might be its most problematic, and it certainly seems strange to find three relatively direct, uncomplicated rockers sequenced next to each other on an album that otherwise proudly proclaims its musical diversity. Heaven’s Wall and This Is Your Sword appear to come from an album of gospel songs Springsteen discarded in favour of what became Wrecking Ball. The former is rousing and upbeat, with stadium-pleasing credentials, but actually breaks little new ground. This Is Your Sword is arguably more interesting, given its hymn-like qualities. In between the two comes Frankie Fell In Love, a fun enough but somewhat lightweight pop song that serves as a great vehicle for Steve Van Zandt’s spirited vocal harmonies.

There are common musical threads in High Hopes too. The lingering influence of the blues is never far away – it’s in the melodic inflections and some of the changes on High Hopes, and it’s in the creeping menace of Harry’s Place (a song that takes Bruce deeper into a world of murky power games and crime than he has yet ventured). The other clear thread is the presence of key collaborator Tom Morello. His effects-laden strafes, taps and rapid-fire fretboard runs sometimes seem apocalyptic and refreshing, but at others a little tasteless. What works perfectly with the quasi-funk agitprop of Rage Against The Machine does not always merge effortlessly with the E Street Band. His abrasions capture an appropriate nastiness on Harry’s Place, but it’s arguable that the excessive solo on The Ghost Of Tom Joad hams up an already terrifying reading of the song (although his more unexpected vocal contribution works very well).

High Hopes could be a contract fulfiller, or it could simply be serving as a peg for continued touring, the field in which Springsteen undoubtedly now best expresses himself. If approached with an open mind and a lack of cynicism, however, its unpredictable twists and turns are in themselves quite fascinating. There’s a spirit of collaboration that is largely new, a genuine and warm-hearted celebration of past members’ contributions and a celebration of the rowdy, uplifting storm cooked up by the 18-strong modern incarnation of the group. It is a fascinating alternative history of the post-reunion E Street Band, a still evolving beast collectively raging against the dying of the light. Our next communion will no doubt be arranged before too long.