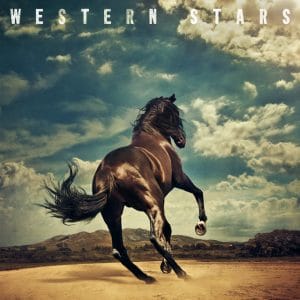 Hot young up-and-comer Bruce Springsteen is now on his third or fourth LP (these things can be confusing, man). By golly, what a talent this young man has. Western Stars has been touted by Springsteen himself – via record label Columbia (home of Bob Dylan, no less) – as being “character-driven songs and sweeping, cinematic orchestral arrangements”. As we know, this young man has been crafting this exact type of song for the past few years, but this is the first album that sounds truly this spectacular.

Joking aside, this album is a little beauty. A diamond of a thing. It was rumoured that it’d be Bruce’s cowboy record, and while it’s undoubtedly a ‘wild California’ record, it’s an album designed to be heard with your mind’s eye on mountains, dusty highways and rusty old trucks, but not to the extent that it’ll have you longing to take your horse down the old town road. It’s Bruce’s regular blend streaked with country, cowboy soul and just a hint of darkness. Springsteen has always tried to write songs that evoke a nostalgia for a time you never knew, probably for a time he never knew himself, and this makes him the undisputed champion of teary-eyed, balled-fist anthems – and although this record is softer and more reflective than the majority of his work, it still has moments designed to raise the old blood pressure.

This album particularly evokes the soft touch of the radio pop of the late ’60s and early ’70s. There’s shades of Van Morrison‘s hazy mountain music, Burt Bacharach and Neil Diamond‘s elegant schmaltz, Neil Young‘s broken-hearted balladry and, well, his own Nebraska and The Ghost of Tom Joad albums.

Opener Hitch Hikin’ immediately sets out the stall for the rest of the record. Bruce’s voice is bright, loud and warm. The acoustic guitar, playing a mellow and restrained tune, supplements his voice better than any full-band arrangement would. Then you have Tuscon Train, which is closer to the Bruce of old, but it’s a strange, lop-sided version of his instantly-recognisable style. The horns don’t blast and honk, they glide and sing. The guitar is pushed right back, out of the way of this classically-constructed rock sound. It’s the sound rock ‘n’ roll made when it first hit its teenage years, when it first started to look at the stars, in the final half of the 1960s – which is just about the time Bruce started formulating one of the most raucous rock ‘n’ roll sounds ever invented.

There are highlights galore across the collection. The Wayfarer is one of the most cinematic sounding tracks Bruce has ever turned his hand to – it reinterprets the film music of the 1950s into a gorgeous, Latin-flavoured drive down an empty highway. Sleepy Joe’s Cafe recalls the early ’70s work of Van Morrison and Harry Nilsson, or even Dexys Midnight Runners, with its gleaming production and blaring instrumentation.

If you’ve heard every Springsteen album, you’d probably end up putting this record somewhere in the bottom half of your ‘all-time Boss’ list, but only because it’s not the kind of music you’ve come to know and love, but a slower, more contemplative record from start to finish. Maybe, if Nebraska is your favourite of his albums, and you’ve longed for a return to that sound, this may satisfy some of that longing. But in truth, Western Stars is the evil twin of Nebraska – where that album broods, this one smiles. Where Nebraska drains the deepest wells of depression, Western Stars gazes up at the sky for answers.

All things considered, Bruce is untouchable at this point – he knows what he likes, and he does what he wants. He just happens to do it better than 99% of writers who’ve ever picked up a pen. Western Stars is, annoyingly, another fantastic album to add to your rotation. But then it is a Bruce Springsteen album. Of course it’s superb.