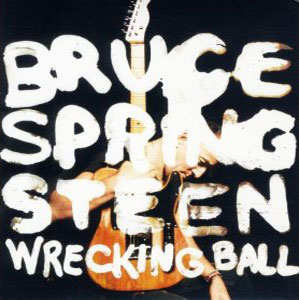 “Bruce Springsteen vs. the global economic crisis.” Put it like that and his latest album Wrecking Ball does not sound promising. It sounds awful. Although if you’re looking for an artist who might have half a chance of making it work, Springsteen would be high on the list. It certainly isn’t a job for Olly Murs.

But don’t come here expecting answers. If Springsteen had a solution to this mess, you’d rightfully hope that he’d have hotfooted out of the studio to catch the first flight to Davos rather than finishing off his 17th LP.

No, Wrecking Ball is an attempt to capture the righteous anger of those on the ground who’ve been affected, to give them a voice, to allow them be heard.

Of course, there’s still no doubting the colour of its collar. None of Springsteen’s protagonists ever stand up and demand that their sweetheart ‘shut down that Powerpoint presentation’ before ‘strapping yourself in my Mondeo’. All of the employees in Wrecking Ball are either pulling engines apart, or mowing the grass, or shovelling in the dirt.

Working men who “pay the bills” while the gambling men “roll the dice”. Working men who “stay thin” while the banker men “get fat”. If this sounds like it’s dealing in caricature, you’re right. Springsteen isn’t drawing with a broad brush here, he’s covering walls with a roller.

It has an unshaking, steadfast desire to rabble rouse. It grabs every single possible means of achieving that (gospel choirs; military drumming; TOM MORELLO GUITAR SOLO!), and more often than not, forms them into something coherent. And on multiple occasions you’re struck by the surprising realisation that this actually could conceivably rouse enough of a rabble to make a difference.

The opening We Take Care Of Our Own, resonates with vituperative purpose, asking questions of America in a fashion which is staggering from an artist of Springsteen’s fame and vintage.

But, musically that is amongst the few which you could describe as typical, rock’n’roll Springsteen. More often than not the overriding style indicates that it’s the Seeger Sessions that have informed this album.

The title track is the best example of it. A wonderfully full-blooded Irish-tinged knees-up. Awash with such energy and momentum that it’s easy to miss the lyrical detail that Springsteen has always imparted in these epics.

The foot-stomping Shackled And Drawn – where Springsteen tackles the chorus like he’s been waiting 30 years to sing the word ‘shackled’ – and Death To My Hometown both further reinforce the Celtic connection and keep the fires of indignation stoked to the extent that you’re about ready to pitch your tent and occupy somewhere, just tell us where Boss.

It’s easy to get caught up in it, but it’s also true that Wrecking Ball is not perfect. It’s an album you have to be in the right mood for – the fury can be tiring, the bombast frustrating. It also peaks at least two tracks before it ends.

But ultimately, it batters you into submission. It’s an impressive work from a genuine legend and as a response to our current situation, leaves us with a pertinent message: in Bruce we trust.