Bryan Ferry And His Orchestra – Bitter-Sweet 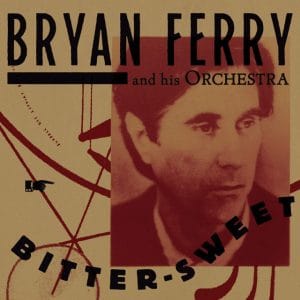 Having always felt a kind of affinity with Bryan Ferry, as we share the same birthplace of Washington New Town and even went to the same school, it’s always inspiring to know of someone from your roots who has more than made it. His influence on music, pop culture and on a generation has long been a glory to behold, particularly if you hail from the North East.

His most recent venture, The Bryan Ferry Orchestra, is a retro-jazz outfit that plays solely in a 1920s jazz style, having provided music for The Great Gatsby and the Netflix series Babylon Berlin. Bitter-Sweet is their second album and is inspired by the TV series, aiming to evoke the 1920s jazz era and inject some zing into classic Bryan Ferry and Roxy Music tracks.

The album kicks off with a rather urgent version of Alphaville, reminiscent bizarrely of Shattering Sea from Tori Amos classical opus Night Of Hunters, followed by the tender and smoky Reason Or Rhyme, both from 2011’s Olympia. It’s wonderful to hear that Ferry’s voice still has a gentle, yet dark and beguiling richness that draws you in.

The rework of Bitter-Sweet is a very cinematic and shadowy affair, you can literally see this being played in a smoky club in 1920s Berlin through a vaselined camera lens. The original minimalist blueprint of Zamba from Bête Noire is preserved beautifully and the celestial string backdrop lifts the drop here in Ferry’s register. New Town starts off quite desolate and then bursts into a romp that you could do the charleston to.

The album could suffer from being on the samey side of coherent, but there is a lot here to cherish. There is a stomping jazztastic instrumental version of Sign Of The Times and, similarly, Ferry’s dulcet tones do not adorn the resplendent redux of the epic Dance Away, yet this is such a beautiful and captivating version of the classic anthem that we forgive him.

Ferry saves one of the best for last with a sultry and ominous rework of Boys And Girls, with adulterous horns, red light castanets and an understated, yet enchanting vocal.

All in, this is quite a cathartic affair, as Ferry weaves in and out of his enviable back catalogue with vim and vigour and with dashes of melancholy and darkness. Symphonic, cinematic and touching.