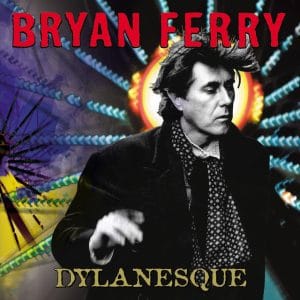 Cover versions have myriad possibilities, but unfortunately, they’re mostly horrendous and pointless. Less common are those takes that present a fresh approach to a familiar tune, where the artist can make the song their own. Tackle an obscure number and chances are, only a few people will notice it’s not your own work anyway.

Bryan Ferry, whether boldly or unimaginatively, tackles a whole album of pretty familiar Bob Dylan songs. On the face of it, the project has the look of the less than prolific, sometime Roxy Music frontman knocking off an easy one. “This is me, smoking a fag, doing that little shuffle, and have you noticed how lustrous my hair still is?” Is this Bry, taking the songs that inspired him and merely mumbling through them with minimum effort?

Well, surprisingly, Dylanesque is, to coin a phrase, more than that. The 11 songs are mostly classic mid-’60s Dylan, extending back to The Times They Are A-Changing, and the most recent vintage, (excepting Make You Feel My Love, from 1997’s Time Out Of Mind), is from 1975. Ferry is of course, no stranger to song interpretation, having launched his solo career in 1973 with a radical reading of Dylan’s A Hard Rain’s A-Gonna Fall, and subsequently put his own mark on Let’s Stick Together and The ‘In’ Crowd, amongst other lesser interpretative achievements. The later Roxy vintage too, scored their biggest hit with a polite but respectful version of John Lennon‘s Jealous Guy.

Bryan Ferry’s voice is one of the most instantly recognisable in the English language. It’s changed with the years, deeper, more hushed, a little tired. His patented tones were out-quavered on Hal Wilner’s recent Rogues Gallery compilation by fellow warbler Antony (of the Johnsons) on a fairly weird and startling duet. England’s great rock crooner has passed 60, as comfortable with himself as ever, but does he care? The unflappable gent may have sailed far too close to the bland for the best part of two decades, but Dylanesque offers at least proof of his desire to do his idol right.

Strange as it may seem to hear an affluent elder statesman mouthing the protest of The Times They Are A-Changing, or the more cock-eyed vitroil of Just Like Tom Thumb’s Blues and Positively 4th Street, when Ferry tackles Blood on the Tracks’ Simple Twist of Fate, he shows the skill of some of his best covers, namely, turning the song into a different beast altogether. The Dylan canon is a goldmine for any artist looking to put a new spin on a classic song, but by Ferry’s own admission, tackling All I Really Want To Do or All Along The Watchtower, you’ve got to follow those who got there first. Hence the slightly Byrdsy take on the former, and the Hendrix-lite wig-out at the end of the latter.

And therein lies the big hairy bugbear on Dylanesque – the band. For no matter how careful and careworn Bry’s immaculate vocal takes are, the band chug along with their muted guitar chords and thudding drums as if it were a mere run-through. It depends on the presence of Dirty Three‘s Warren Ellis, adding strings, or old foe Brian Eno‘s textures (surely the only man who could claim such a job description), to make the instrumentation rise above the mundane. Some fine singing then, but overall something of a missed opportunity. Someone put this man in a studio with Rick Rubin, now.