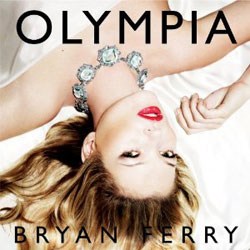 It’s been nearly a decade since the last album of Bryan Ferry originals, and you’d be forgiven for thinking that there wouldn’t be another. Albums of cover versions; reunion tours with Roxy Music: all the signs suggested that the legendary ladies’ man was sliding into a comfy retirement. It’s time to worry when the press take more interest in your son’s political shenanigans than your music.

And yet, here’s Olympia: and without hearing a note, the initial signs are good. There’s a supermodel on the cover (Kate Moss this time) – always an indication that we’re in for some Roxy-esque glamour. The roster of collaborators and guest musicians is impressive, taking in Groove Armada and Scissor Sisters to name but two. But most refreshingly, all of Roxy Music are on board – Brian Eno included – for the first time since 1973.

Make no mistake though, this is neither an exercise in re-treading past glories with his old chums nor an attempt to gatecrash the cool kids’ party: this is a proper Bryan Ferry work, and undoubtedly one of his best.

First of all, Olympia is a great-sounding album. It’s lavishly produced, picking up where the studio wizardry of Roxy Music’s Avalon left off, and places us firmly in FerryLand. A country situated on the border of ’50s Manhattan and Weimar Berlin, where the Campari and sodas come thick and fast, heaven is an over-the-shoulder glance from an impossibly beautiful heiress, and hell is losing it all at the roulette table. No-one creates this atmosphere of loucheness and decadence quite like Bryan Ferry, but it’s not just the hushed vibrato and meticulous production that score highly this time round. Eight of the 10 tracks here are written or co-written by Ferry himself, and they represent a real return to form.

Reason Or Rhyme is probably the best Ferry original since the 1980s: a long, piano-led, slow-dance number which swoops over the listener like a velvet drape. “That look in your eye / the brush of your cheek / these are the moments in life that I seek,” croons Ferry, his voice cracking slightly. David Gilmour‘s guitar swirls in the background and a bevy of backing girls fill all available space with their oohs and aahs. No-one else could get away with it.

Essence-of-Ferry moments aside, what’s most impressive about Olympia is how well the collaborations work. With so many diverse musicians and co-writers at play, it could easily have descended into scrappiness. But Ferry is clearly the boss here: and other artists’ contributions always complement rather than sideline him. Shameless, a double-header with Groove Armada, works amazingly: though repetitive beats are relatively new to his work, he manages to draw out the soul and vintage-funk influences of his collaborators to create a seamless whole.

Heartache By Numbers, the Scissor Sisters collaboration, does much the same. And the contributions from Roxy Music colleagues (Eno’s keyboards, Andy Mackay’s oboe) add a subtle flavour without taking us directly back to the art-pop of the ’70s or smoochy balladeering of the early ’80s.

A Bryan Ferry album wouldn’t be a Bryan Ferry album without a couple of carefully-chosen and customised cover versions, and this is no exception. In particular, Tim Buckley‘s Song To The Siren not only sounds like Ferry wrote it himself, but makes the original sound like a raw demo.

Olympia is a rich, soulful immersive album; and a terrific return to songwriting form. It might be too rich a stew for those who prefer their music delivered from the front of the stage rather than from a chaise longue at the back. But for anyone who appreciates Mr Ferry’s oeuvre, it’s what you’ve been waiting for.