Buffet Lunch – The Power Of Rocks

by Matt Cotsell
published: 8 May 2021 in Album Reviews
Tweet 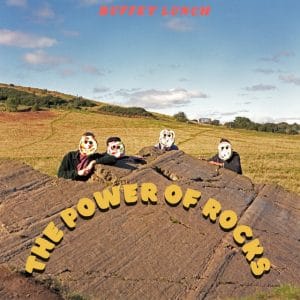 Choosing to record their debut album by the side of a picturesque loch, deep in the Scottish mountains, seems to have left a confident impression on the various band members of do-it-yourself newcomers Buffet Lunch as the aforementioned record The Power Of Rocks, out now on the always leftfield and interesting Upset The Rhythm label, gently lollops along on a decidedly uneven path, with crystal clear purity and freshness.

Letting themselves become susceptible to the charm of their surroundings and losing their inhibitions creatively, the disarmingly wonky collection is testimony to the reassuring and dramatic allure of companionship and the great outdoors.

The ambulatory drum tumbles and guitar screeds of the first three numbers Red Apple Happiness, Orange Peel and Pebbledash recall prime Captain Beefheart, if The Magic Band had been commissioned to soundtrack a mid ’70s sitcom. Seemingly tense and restrained at once, they spill into each other generously sending the listener roaming down an irrationally unstable path as they address political ideology and social etiquette and the title track is a cantankerous ode to feeling the sun on your face. Elsewhere the track Bladderwrack is, true to its namesake, salty and slippery in its execution and Said Bernie is a finely clattering diversion, filled with infantile personality.

For all its absurdist trappings, The Power Of Rocks is a deceptively calm affair, so feel free to roll up your jeans and wade in. Just brace yourself for how crisp and punchy you might find it initially, because it takes a while to get acclimatised. But once you are, you’ll want to dive down to its murkiest depths.