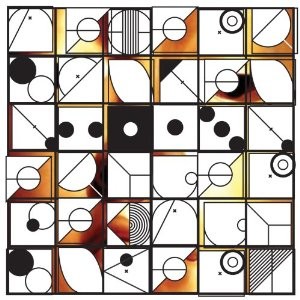 Buke And Gase erupted in the US a couple of years ago to widespread acclaim. Their debut disc wasn’t really noticed as much on these shores, but there’s now an opportunity to right those wrongs with the arrival of their follow-up, General Dome. Buke And Gase are a duo comprising of Arone Dyer (who plays a ukulele modified to a six string bass – hence the Buke of the band’s name) and Aron Sanchez on the “Gase” (a guitar/bass hybrid of Sanchez’s own creation).

If alarm bells ring at the thought of these homemade instruments then you should rest assured that is no twee jugband or novelty act. You won’t find the duo cleaning windows with George Formby; they’re more likely to smash the windows to pieces and dance barefoot on the shards. The instruments are filtered through various effects pedals and amps to the point where they sound like a slab of noise more akin to calamitous sound of Sleigh Bells than their homemade credentials would suggest.

This discord and disjointed sounds can be challenging to a casual listener but if you like your music layered and inventive then there’s much to sink your teeth into. This sometimes nightmarish and brooding mix sees Dyer’s vocals echo Kristin Hersh on some of Throwing Muses’ more esoteric moments, and Lou Reed’s Metal Machine Music makes its presence felt.

Buke And Gase like to think that the 13 tracks here are improvised rather than written, but that’s a bit misleading as there’s organisation on display; it’s not a free-for-all. However, there are several key changes per track, and use of repetitive riffs that would feel at home in a jazz jam if it weren’t for the sonically jarring sounds.

Perhaps the unsung hero during the creation of this disc is Sanchez’s soldering iron, responsible for the creation of the instruments on display and some of the effects that filter render them so strangely. This spirit of re-invention is reflected in the album’s artwork – an elaborately codified alphabet that reflects the group’s attempt to invent their own musical language. Like grasping any new tongue it’s tough to get to grips with them. It’s best to let yourself be swept along until you achieve full fluency.

It’s true that General Dome won’t be for everyone, but Dyer and Sanchez have certainly assembled an interesting creation. If you missed them the first time around than let your curiosity get the better of you and make some time to wallow in their dark inventions.

Buke and Gase MP3s or CDs

Buke and Gase on Spotify

More on Buke and Gase
Buke And Gase – General Dome