Bullet For My Valentine – Fever 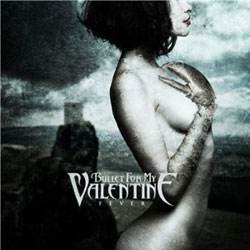 Nowadays, “melody” is the word a band uses to describe its new direction. Bullet For My Valentine are a case in point. After the international success of their sophomore album Aim Scream Fire (2008) made them into one of the most important British metal bands around, the Welsh metalcore quartet sought to write some catchy tunes and convey a more classic sound on the follow-up, Fever.

Lead single Your Betrayal kicks off with military-style thudding drums, which continue throughout the song in unison with chomping guitars. A melody lurks beneath the fast and furious tune, yet it manages to escape our grasp. Ferocity and velocity set each track in motion, but the classic sound BFMV are so keen to capture also requires a solid rhythm section, and that’s rather lacking. Michael Thomas’ brilliant drumming is given the spotlight, but the bass is virtually drowned out.

While some fans may hear, or think they’re hearing, a more classic metal turn on the title track which follows, for their parents it’ll just be the same old classic racket their kids listen to. The equally intense The Last Fight showcases Michael Paget’s guitar heroisms competing with Matt Tuck’s high-pitched screams. Alas, the album goes on to prove that neither expert guitar playing nor visceral moments can make up for poor songwriting.

Most of the tracks sound as if they’ve been composed using the same thrash beat, with only a couple of melodies carrying the same tried and tested themes of post-adolescent angst, self-pity and having one’s heart shredded by a heartless female. The mid-tempo A Place Where You Belong rubs shoulders with efficient melodic turns, but its lyrics just make us cringe: “Just kill me now and let the good times roll.”

Desire and despair infuse Bittersweet Memories, a track that stands out as more original, but then the chorus comes and lets it fall in the tried-and-tested pattern once again and the emotions that were building up fall into apathy. He asks “Will you die for me ‘cos I’d die for you” on Pleasure And Pain, and on Alone he declares “‘Cos your heart is made of stone / You can die and rot alone.”

Lyrics have never been Tuck’s forte, but the issue here is his delivery: it’s more emo than metal, and that just screams Don Gilmore. The producer, whose credits include Linkin Park, works often at manipulating his sound into a band rather than working with a band’s sound. So it’s only fair to note that it’s not necessarily the songwriting that is to blame, but rather its one-dimensional production and interpretation.

Gilmore has merely rendered Fever more American market-friendly and given it a strong flavor of stateside nu-metal. It’s a pattern that is just too repetitious, too anodyne and just plain insipid.

Bullet For My Valentine MP3s or CDs

Bullet For My Valentine on Spotify