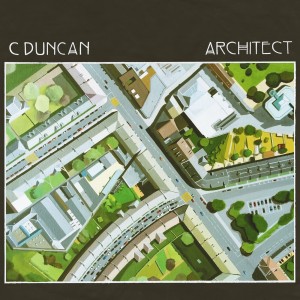 After one listen to this lovely record, you could be forgiven for thinking Architect is the work of a close harmony group with electronic music prowess. You would be wrong, for all this is the work of just one man.

Chris Duncan, to give him his full name, is a twenty-something Glaswegian whose music is presented, undiluted, from his bedroom. Already he has taken on a number of key musical influences, from the piano and choral music of Debussy and Ravel to the songwriting skills and harmonies of Brian Wilson and, apparently, some production techniques favoured by Kevin Shields and Robin Guthrie. Despite these multicultural sources, his music remains irrefutably British.

Architect has a lovely, easy air about it, carefree but also deeply emotional at times – especially when Duncan adds in a harmony or two. The multitracked vocals work wonders in songs such as Say, where Duncan spreads the lines out to as many as six or even eight parts.

He achieves a very impressive balancing act between the music written within the intimacy of his bedroom walls, evidenced by the intricate guitar lines, and the much bigger end product, fed through the reverberant harmonies that expand the likes of Silence And Air into windswept beauties. The subtleties of the electronic beats are also an aid, keeping the music moving along nicely.

The ‘Britishness’ is found through channeling the wistfulness of Nick Drake with some endearing folk-like melodies. For is a good example of this, its plaintive yet strangely powerful whistle a hook to hang on. Here To There, meanwhile, enjoys the simple pleasures of how “we’ll take the train from here to there”, Duncan with an old head on young shoulders. Meanwhile the piercing organ sound that cuts through the cloudy textures of By brings hints of 1970s pop, before the song builds beautifully.

Architect is a largely positive construction, both musically and lyrically. “Someone came and stole my heart (I don’t want it back!)” proclaims the lovelorn He Believes In Miracles. “I feel new…I feel so alive!” exults the celebratory Garden, seemingly an ode to all things blooming – flowers, love and otherwise. This is the song whose chord progressions point most obviously to Duncan’s classical training. That’s not to say you need this training to write a good pop song, but that these carefully directed yet highly original harmonic movements give the music an extra dimension. Novices does this too, the sleight of musical hand beautifully worked.

The closing song I’ll Be Gone By Winter is strangely heartbreaking in its sentiments and actually sounds a bit out of kilter with the rest of the album. A tear drops to the page as Duncan sings, “How slow the days go when you don’t come around anymore”.

This is, though, a subtly ambitious debut that sweeps its owner through everyday life with its many and varied emotions. It is topped by some highly attractive artwork – which also turns out to be from the pen of C Duncan himself. Is there anything this man cannot do?