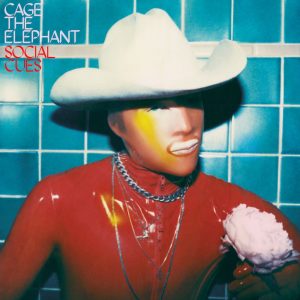 After a three-and-a-half-year gap, Cage The Elephant’s fifth studio album Social Cues is another twist in an interestingly varied career. Like some other recent famous American bands, they took off in the UK before the US with their self-named debut album ten years ago, while the follow-up Thank You, Happy Birthday reached Number 2 on the Billboard charts. Though they then signed with major label RCA their mainstream success has somewhat receded, but they have remained a big noise on the alt-rock scene.

Their eclectic, evolving sound difficult makes them to categorise as they’ve moved through blues, garage, punk, grunge and rocktronica. The band’s previous offering Tell Me I’m Pretty (produced by The Black Keys’ Dan Auerbach) won a Grammy for Best Rock Album. This time, pop producer John Hill (who has worked with the likes of super-divas Shakira, Christina Aguilera and Rihanna, as well as co-writing Portugal. The Man’s monster hit Feel It Still) has been brought in to give the moody songs an alluring sheen.

Social Cues is Cage The Elephant’s darkest and most personal album yet. The lyrics reflect the emotional cost of the rock’n’roll business, the pressures of constantly having to play a role, its toll on sustaining relationships and in particular the break-up of front man Matt Shultz’s marriage. There’s a lot of running and hiding in these songs.

Right from the start, Shultz sounds close to the edge on Broken Boy: “I was born on the wrong side of the train tracks.” It begins with droning synths then sparks into life with a frenetic tempo propelled by piston-like drumming evoking a sense of desperation. On the title track he has clearly had enough of being a rock star as he stretches for his falsetto: “Hide me in the back room / Tell me when it’s over / Don’t know if I can play this bar much longer.” Its catchy, jerkily neurotic synth riff is reminiscent of the one in David Bowie’s Ashes To Ashes.

The darkly atmospheric Night Running (co-written by Beck who duets with Shultz) is a dub-reggae-rock track about a shadowy flight from sinister forces, real or imagined. The infectious, bittersweet lead single Ready to Let Go pinpoints the moment when Shultz and his wife realise the relationship is definitively over: “Sun went down over Pompeii / On both sides the vow was broken.”

The doomily post-punk House Of Glass features buzz-saw guitar, with Shultz conveying his sense of illusion and isolation as he puts on an act that means nothing: “Smile for the camera / Repeat and do it over.” But on Love’s the Only Way the pace slows down and the mood mellows with a lush string arrangement, as he looks for hope. And in the spacey lounge pop of The War Is Over (à la Arctic Monkeys’ Tranquility Base Hotel & Casino) he accepts that love can break walls down.

In the softly orchestral What I’m Becoming feelings of guilt and regret are foremost: “Never meant to hurt you, never meant to make you cry / I’m so sorry, honey, for what I’m becoming.” Tokyo Smoke has trippy synths and punky guitar, as Shultz reveals his divided self: “My public smile, my double face / Half in the light, half in the shade.” The album closes with the stripped-back ballad Goodbye, based on simple piano chords and gently swelling strings: “I wish you well, I want to see you smile” – a tender final farewell.

Cage The Elephant MP3s or CDs

Cage The Elephant on Spotify