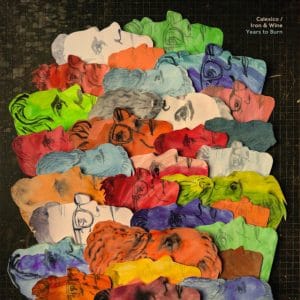 Fourteen years since their last collaboration, the In The Reins EP, Tucson’s favourite sons Calexico and Virginia’s Iron And Wine have once again come together to release new music, this time in the shape of a full length album, entitled Years To Burn.

Recorded in Nashville’s Sound Emporium, Years To Burn consists of eight tracks written by both Calexico songwriters Joey Burns and John Convertino, together with Iron And Wine’s Sam Beam. Whereas on In The Reins Beam wrote all the lyrics and Calexico added their masterly Americana/Tex-Mex musical stamp, this new album sees a fully balanced partnership, with songwriting and music equally shared between the two bands.

Opening track What Heaven’s Left is gorgeously melodic and paves the way for the rest of the album with soaring harmonies and choruses. It opens with a count-in by Burns, but what you think is going to be a typical Calexico number quite quickly becomes something else. Beam’s vocals immediately give a familiar, warm feeling and, as soon as Burns joins in with some of his incredible harmonies, it’s clear this album is going to be something very special. The combination of Burns’ and Beam’s vocals are about as folky as it’s possible to get, and What Heaven’s Left proves to be the perfect lead in to what follows.

The subsequent tracks have a fluid consistency that runs through the entire album. While each track seems to flow into the next, each song is a story in itself; of heartbreak, love and loss. Midnight Sun is a change in pace, this time with Burns on lead vocals. The track really wouldn’t be out of place on a Calexico album. Father Mountain, the first single release, gave an initial glimpse of what was to come from the reformation of these two much loved American artists. Those soaring harmonies are abundant, and it’s immediately clear why this was chosen to introduce the album to the world.

A real curve ball follows. Outside El Paso is a sub-two-minute, jazz-esque odyssey and could have probably been left off the album entirely. It feels rather random, and in some ways dampens what’s gone before. But elsewhere, The Bitter Suite adds up to an eight-minute jumble of styles, each one very different from that last, with aspects from both artists’ works evident. That both have very distinctive styles is readily apparent here, making for something of a compilation showcase piece.

The title track slows the album down further. Here we hear a soulful, gentle piece which showcases the vocal beauty of both Burns and Beam’s voices. And in the blink of an eye we reach the final track In Your Own Time. With a really folky vibe, it has something of a vintage feel to it.

Fans of either Calexico or Iron And Wine should be pleased with this full-length collaboration, which feels very much like a joining of two halves to make a larger, rather special whole.