Calexico – The Thread That Keeps Us 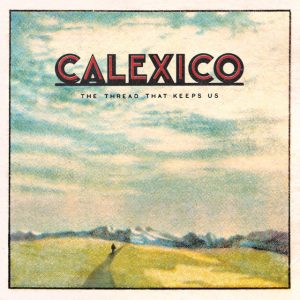 This time around, however, the band decamped from Arizona to Panoramic House in Marin County, California to record. The influence of their temporary home is clear throughout the album as the songs expand into previously unexplored threads and broad sonic landscapes.

Lead single End Of The World With You opens the album, immediately confronting the elephant in the room while finding beauty in nature and humanity in the ‘age of the extremes’. It’s classic Calexico, with a little extra grit.

Darker still, Under The Wheels, underpinned by Jacob Valenzuela’s trumpet playing, lends a sense of carnival but is a cautionary tale for a world constantly in conflict. In 2007 Arcade Fire invited Calexico to cover Ocean Of Noise. Under The Wheels would lend itself well to reciprocate the compliment.

The Town & Miss Lorraine on the surface is reminiscent of ’60s easy listening, but backed by the mandolin, Joey Burns croons of the dark power of the titular Miss Lorraine as he slides into the sea. The influence of the views over the Pacific Ocean is clear in this overtly cinematic tale.

Mid-album, the Spanish Flores y Tamales and the raucous distortion of Another Space push the album forward. Another Space in particular demonstrates how the band, along with long term engineer and collaborator Craig Schumacher, embraced chaos to fully mine the potential in each song, to try to find new depths whilst remaining true to the heart of Calexico.

Musical interludes Unconditional Waltz, Spinball and Shortboad are scattered throughout the album, giving the listener space to surface from the darkness and rebalance. “Going into making the album, the only thing I really knew for sure was that I wanted there to be moments that felt free and spontaneous – just these moments of no time, no lyrics, no agenda,” says Burns. These songs bear testimony to this approach.

Inspired further by the wild beauty around the recording studio and addressing the devastating impact of modern life on the environment, Burns wrote Girl In The Forest with help from his daughter, who counselled him to keep the heart of the story simple and relatable. It closes with the parting shot: “So much rides, on which path we decide.” A stark warning, indeed.

Thrown To The Wild is a hazy triumph, a hummed harmonies layer with melancholic trumpet and wild guitars building into a captivatingly bleak expanse, as if heading out into the Pacific Ocean. The final song Music Box, by contrast, is a sweet lullaby written as “a love song for my kids”, it brings us safely back to the shore, offering light at the end of a dark journey, and hope for the future. In The Thread That Keeps Us, Calexico have learned to let go a little, to let nature take over. The result is surprisingly comforting.