The Callas – Am I Vertical? 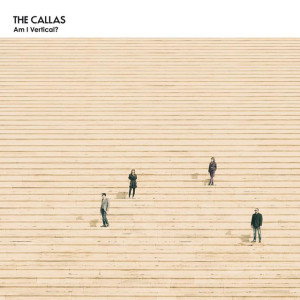 You would, of course, be forgiven for rolling your eyes and shaking your head at the sheer audacity of any band referring to their music as the “tip of a broader creative enterprise”. At the very least, the implication of such a statement is that the musical endeavour on offer is either an afterthought or merely the garnish to a creation that takes precedence over the grooves. There’s also more than a hint of smart-arse posturing from the kind of people hedging their bets to see which lumps of their artistic shit stick to the wall in a desperate attempt to dodge the wage slave alternative.

Or so you’d think. But taken on its own terms, The Callas‘ Am I Vertical?, the follow-up to 2011’s Objekt, stands up as a strong enough entity to justify such claims. Produced by Nick Cave & The Bad Seeds‘ Jim Scluvanos, who also co-wrote the lyrics and plays drums on several tracks, this is, in the main, a tightly coiled collection of spiky punk nuggets shot through with a pop sensibility that’s comparable to the days when The Fall made cohesive statements. Based around Greek artistic siblings Aris (guitar/vocals) and Lakis Ionas (bass/vocals) – the brothers are augmented guitarist and singer Crysanthi and drummer Marilena – The Callas is an entity worthy of your attention.

The claustrophic and oppressive atmosphere of opener Lustlands sets the pace. Yes, the beats are driving as they coalesce with a grinding, crunchy bass and the kind of chants that wouldn’t sound out of place at a sex-magick ritual but there nonetheless remains a stifling sense of menace that makes their invitation of “Land of holy joy/Trees of fairy toys/Would you like to come and join us?” a temptation that’s difficult to resist for the more adventurous minded deviant. In this respect, The Callas share a platform with Australia’s mighty New War, another band that succeeds in creating suffocating soundscapes that manage to seduce rather than repel.

Lyrically, the album works best when the words are delivered in short bursts of rapid fire machine gun cracks that have the effect of conjuring up mental images that help the accented delivery from falling into an over saccharine confection. In this respect, the minimal delivery of Black Leather Books and the driving motorik garage rock of East Beast prove to be highlights and the overall effect is that of teeth-grinding tension and anxiety. Conversely, the scuffed and skuzzy grind of the hipster-baiting I Hate You But I Love You fails to convince thanks to a surfeit of words that reduces the overall sentiments to the level of hokey comedy.

However, these shortcomings are more than made up by the sonic delivery that’s on offer. That’s You is characterized by layers of distorted guitars and judicious bursts of feedback underpinned by strict and precise metronomic rhythms that once again add to the overall feeling of threat and tension that permeates the album. Elsewhere, I Wonder, with its space and exacting mood of propulsion, attempts to make some sense of a world drained of resources and freedom that gives way to fatalism and a loss of security. This is a bleak worldview for sure but one that chimes with the times.

Not that Am I Vertical? resides in a slough of despair. The closing title track hits back against the encroaching darkness with something resembling optimism: “We are the gods forming something from nothing/We are the kids of disease and desire/We are the heirs of faith and despair…” This a note that’s pitched perfectly to conclude an album that not only engages with the turmoil of the wider world but one that connects with the concerns of those on the receiving end of it.

The Callas MP3s or CDs

The Callas on Spotify

More on The Callas
The Callas – Am I Vertical?