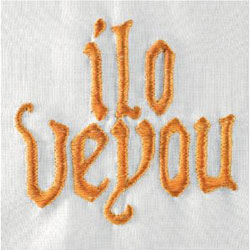 Camille is something of a national treasure across La Manche. She’s won the Victoire de la Musique, received a nomination for the BBC World Music Awards and arrested the attention of anybody who’s listened to her work. She’s made a name for herself in vocal experimentation (remember the angry duck impersonations of Canards Sauvages?), and in the past, that’s gone hand in hand with experimentation behind the mixing desk – cf. 2005’s MaJiKer-produced, effect-rich Le Fil and the follow-up, Music Hole.

Yet Ilo Veyou is a total departure in the latter respect. Stripped down and low on instrumentation, each track of the new album was recorded in one take, sans headphones, with very little post-production. The result is doubly startling – thin musical texture on the one hand, but accompanied by a redoubling of the vocal experimentation on the other. What ensues is unhinged, bizarre and often utterly mesmerising.

With its pseudo-franglais title (move the space two characters right), Camille openly acknowledges that her latest effort is heavily influenced by recent motherhood. Several of the tracks babble in babytalk, seemingly targeted more at her newborn than at an audience of adults. Message is a mere 49 seconds of twee la-la-laing, while Bubble Lady is as adorable as it is deranged. But we’re not always paying this ‘bubbly-wubbly lady’ for her lyrical coherence – sometimes the lyrical performance itself suffices, and it’s suitably arresting.

Recorded with a string quartet, the session musicians nevertheless play second fiddle to the virtuoso performance of Camille’s voice. Whether the unsettlingly deep belly-tones of the title track, the nostalgic-old-lady-warble-becomes-patriotic-opera-diva (could that be an Edith Piaf homage, possibly?) of La France or the the xylophonic bounce of Tout Dit, the sheer versatility of her instrument is spellbinding, and used to great effect. In oriental-sounding Le Berger, she even impersonates a flute.

And despite the occasional baby-babble, there are moments of excellent writing, too. The frenzied rhythms of Aujourd’hui are like demonic beat poetry. In Pleasure, “I want to feel pleasure as much as I feel pain, I want to feel pain as if it was a leisure” provides a downright sexy rhyming pattern over a tight-knit rhythm. And Wet Boy is a ballad whose haunting grace evokes more than a little of Eva Cassidy.

But the real highlight is Mars Is No Fun – it might not be, but this song certainly is. Strings sweep in to turn a twee picture-postcard into a full-on love song, and the blending of the bizarre with the banal (“I want to go back to Earth and live with you, and hang out in the shopping mall in Milton Keynes”) is simply delightful.

Camille is an artist who deserves attention. At once understated and innovative, her often-crazed genius makes this album, different from what went before yet in its way a product of it, a pleasure to listen to.