by Ross Horton
published: 5 May 2020 in Album Reviews
Tweet 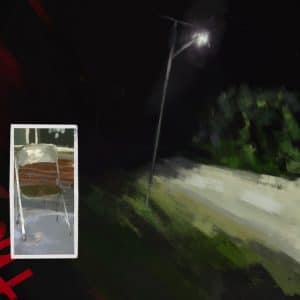 Making A Door Less Open – Will Toledo’s 12th(!) album – is, first and foremost, an album of experimentation. Whether it was designed as a Grand Artistic Statement, or whether he was just throwing things at the wall to see what stuck, it doesn’t always work.

Will Toledo has talent, and charisma, and star power, in spades. His live rendition of Lou Reed‘s Waves Of Fear superseded years – decades – of other folks trying to pay homage to The Grumpy One. It was as though Waves Of Fear was written for him, by him, or about him. He has that effect on the music he loves – he interprets it, refashions it, and restates it as though it were being performed for the first time.

Making A Door Less Open is, essentially, Will Toledo reinterpreting versions of himself, to weirdly puzzling effect. In promotional material for the album, Toledo has been wearing a gas mask and hi vis outerwear, as though he were an extra from a post-dystopian horror movie (aren’t we all?) – in fact, Toledo doesn’t consider this to be a true Car Seat Headrest album in the strictest sense, more a collaboration with his gas masked alter ego Trait. So far, so bizarre.

Throughout the album, we get a variety of new shades, new ideas and new styles. We get noir electropop in the vein of The Killers on Life Worth Missing and Deadlines (Hostile). We get heartbroken Neil Young-ian heartbreak on What’s With You Lately, which features Toledo’s signature yearning vocals. Then, you have Famous, which is built on hip hop foundations, but keeps its tongue firmly in its cheek.

Deadlines (Thoughtful) draws on LCD Soundsystem and Hot Chip for inspiration. Hymn (Remix) is a misfire, but only because it reaches for something that Toledo has never been able to attain: modernity. Toledo plays with dubstep sonics and autotuned vocals, and it just doesn’t work. Hollywood, a sub-Beck stoner mashup, also misses the mark somewhat.

This is a mixed bag, and is – unfortunately – a bit of a momentum killer. Toledo’s last album, the refashioned Twin Fantasy, was his third successive success, after the incredible Teens Of Style And Teens Of Denial. Making A Door Less Open does feel like a bit of a stopgap, a bit of a throwaway project, when it should be a victory lap. But then again, Will Toledo is just the kind of maverick we need in 2020, and Making A Door Less Open is just the kind of album we didn’t expect. Maybe the problem is us.