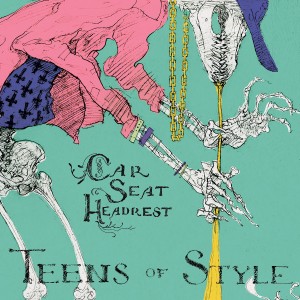 Will Toledo: a name (part pseudonym) that you’re unlikely to be familiar with unless you’re from the small town of Leesburg, Virginia, where Toledo has been recording music at a staggering rate for years from the confines of his bedroom. Released via Bandcamp at giveaway prices (mostly decided by the buyers themselves), he’s clocked up a breathtaking 11 albums in the five years or so since he began at the age of 17.

Toledo is now resident in Seattle where he’s recruited a bassist (Ethan Ives) and a drummer (Andrew Katz) to flesh out a full band. Until this point he’d largely been alone, self-recording and self-releasing his music under the unusual moniker of Car Seat Headrest, the name arrived at as a by-product of a lack of confidence over his singing voice that saw him drive to a quiet car lot to sing in privacy from the back seat.

Teens Of Style represents the first Car Seat Headrest material to enjoy a full label release after Matador signed him up on the strength of his huge back catalogue. A compilation of sorts, it’s a collection of reworked tracks from three early albums; rather fittingly, that’s just how Toledo works, storing away stashes of snippets – a riff here, a lyric there – until they’re ready to come together naturally. The results are a mind-blowing concoction, with punk, shoegaze, slacker rock, psychedelia, and bubblegum pop melodies amid the many touchstones.

The tracks Toledo has chosen to revisit are outstanding from start to finish, and Teens Of Style might well be more consistent than a lot of bands’ greatest hits albums. Opener Sunburned Shirts is drenched in effects, most notably the vocals – a common theme throughout – and explodes with a thumping guitar riff boasting a perfect chord progression. Distorted, wailing guitars reminiscent of The Stone Roses open The Drum before it turns into melody-laden slacker rock, with a compelling stop-start structure that builds to a melodic crescendo. Something Soon uses subtle electronica alongside almost tragic lyrics like “I want to sing this song like I’m dying” – but the melodies are so catchy and the chorus so explosive that they stick in your head; the euphoric conclusion is scintillatingly resplendent.

Times To Die also soars, with an anthemic chorus set amongst lazy, slack stylings whilst Maud Gone marks a detour into more prominent electronica, a mesmerising keyboard line this time set alongside a Beach Boys-like vocal melody and gentle percussion that leads to a magnificent chorus. Strangers, a contender for track of the year, sees slacker-rock guitar riffing lead to a captivating chorus; after quieter, Byrdsian jingle-jangle the track explodes with tortured musings aside the most nerve-tingling vocal harmonies – it’s just sensational. Los Borrachos (I Don’t Have Any Hope Left, But The Weather Is Nice) flits between quiet and loud sections magnificently before soaring once again as does closer Oh! Starving, the repetitive catchiness of the closing passage sealing the album’s majesty and prompting you to hit the play button over and over again.

Anyone new to Car Seat Headrest is, quite frankly, in for a jaw-dropping discovery. The quality of Toledo’s songs is gobsmacking; the lyrics are enthralling, the melodies are to die for, the musicianship is raw yet brilliant. OK, Teens Of Style is a compilation, in some ways a best of – although fans would be quick to introduce you to other tracks that are held in even higher esteem – but it serves as a perfect introduction. Toledo is an introvert; it was always the intention to gain a wider audience, but how he will handle the inevitable clamour coming his way is a little concerning. He is, undeniably, a 24-carat genius and Car Seat Headrest are utterly brilliant. 2015 has suddenly become a whole lot better and with a first proper studio effort – Teens Of Denial – due in 2016, next year could be off to a flyer too.