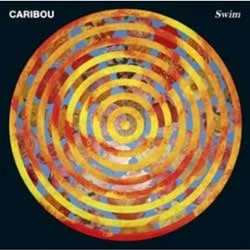 Polaris Prize winner and sometime live percussionist Dan Snaith, operating first as Manitoba and now, post-lawsuit as Caribou, is one of modern music’s more cerebral artistes. With his PhD in Mathematics, as well as critical acclaim for his complex yet engaging electronica, his releases and his live act – complete with band and entertaining visual projections – are known for, as he puts it, “playing around with mental ideas”.

In pre-release interviews for Swim, Snaith has indicated that, as per the album’s title, he has been inspired by water: its movement and fluidity, which he has aimed to capture: “Dance music that sounds like it’s made out of water rather than made out of metallic stuff like most dance music does.”

With this as a marked “pointer”, further reinforced by the album’s title, the watery theme becomes very apparent on listening. Rainfall sounds are mimicked by synths: cascading on opening track Odessa, more of a pattering on Kali, and some random spits and spots on Found Out. The backing of Jamelia meanwhile actually bubbles and boils. In more oblique ways too, this is the most liquid of albums. The music ebbs and flows, not following any standard verse / chorus / verse structure, but instead flowing and meandering like a river, or pitching – hitting peaks and troughs like a turbulent sea, particularly on Kali, Found Out, and the two most remarkable tracks Bowls and Hannibal.

Bowls is ghostly and magical, like a haunted fairytale. The Tibetan bowls which clang gently bring to mind the bells on a barge gliding through the fog, and every now and again a harp swoops in, gloriously, sprinkling aural fairy dust across the track. Flutes chirrup, wooden blocks keep rhythm and a million different ideas seem to burst out into the multiple levels of noise, tune, rhythm and effects coursing through it. Hannibal is similarly stacked with texture, this time with what sounds like a fairground hurdy-gurdy serving as the theme – a warm, organic centrepiece around which different sounds and tunes bob in and out of view, from shuffling percussion to assertive brass, from funky bass to glockenspiels.

Also terrific is Sun, with its hazy, sun-dazed echoing vocal (simply the word “sun” repeated over and over again) and the cymbals too evoking a shimmering, fuzzy heat.

Elsewhere, much of the lyrical content seems to revolve around descriptions of various aspects of male/female relationships. These are often taken from the female point of view – as in Odessa’s “Sick of these lies / She stuck with him for far too many years of her life”, and are more often than not negative. Kali appears to be describing a couple on the point of breaking up: “She can hold on to her own / If it comes to push and shove” and “He keeps himself held back / For both their peace of minds”. In places there appears to be some hope left for the couple: in Leave House, for example: “Yeah, we’re both alone now / But not forever / The thing that makes us lonely / Will bring us back together”; and in Hannibal too: “He still needs her… when he gets home the house feels empty”. By the album’s close though, on Jamelia, all seems lost: “What more could I give her? / What more could I do?”, asks guest vocalist Luke Lalonde of Born Ruffians defeatedly.

For a dance music album, Swim sounds not only refreshingly organic, but also remarkably downbeat. Most remarkable of all, perhaps, is the way that Caribou have succeeded in marrying up these two things and still managed to make an album that is infused with a rhythm, a groove and a watery loveliness all of its own.