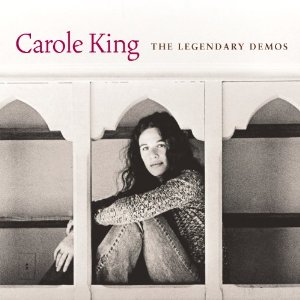 Songwriters don’t come much more revered and respected than Carole King. Her career in pop began over half a century ago, firstly as a staff writer with her husband David Goffin for Aldon Music, who were part of the peerless pop production line of the Brill Building era, before moving on to massive success with her 1971 solo breakthrough Tapestry. Since, there have been countless hits and millions of album sales that have helped to establish King as one of the landmark musicians in American music history.

The Legendary Demos is a secret history of Carole King. The songs here will be immediately familiar to generations of fans, with King-penned hits for The Monkees, The Everly Brothers, The Righteous Brothers, Bobby Vee and Aretha Franklin all included. But King’s not so familiar original versions offer a striking insight into the working practices of a songwriting legend.

Of course, as is the way with demos, the sound is at times scrappy and rough, particularly when the demos have been locked in storage for decades and recorded using equipment that would now be regarded as primitive. There is something rather appealing though about the crackle and hiss of these old recordings, for they give the album a wonderfully intimate and raw sound. It can roughly be split into two sides. The earliest tracks which were ready-made hits by King as a songwriter for hire in the early ’60s using these demos to entice possible performers, and the later tracks from the pivotal year 1970; six songs that would feature on Tapestry are included here. It is on these songs like the supremely assured soulful ballads Beautiful and Way Over Yonder that you can hear King gain a newfound confidence in her voice as she realises that she does not need to write songs for anyone else and can instead make it all on her own.

The highlights are King’s powerfully soulful solo piano pieces which ripple with emotion. A stunning version of Just Once In My Life, made famous by The Righteous Brothers, is particularly affecting, and a measured take on It’s Too Late, from Tapestry, offers another example of the earthy emotion King was capable of putting in to her songs. Despite these versions being only demos it is remarkable how fully formed they are. The arrangements sound carefully thought out and nothing seems out of place or underdeveloped.

A gradual progression in the depth of King’s songwriting is discernable as she addresses ever more personal subjects and feelings. (You Make Me Feel Like) A Natural Woman is perhaps King’s most famous and emotional song, and the version here sees her wring every last bit of emotion out of it. Aretha Franklin’s version is considered definitive, but the stark beauty of King’s stripped back demo is arguably even more compelling.

A spirited, freewheeling version of You’ve Got A Friend, another one of King’s much loved standards made famous by James Taylor, closes the album. But despite the familiarity of an oft heard song there is a heartwarming quality to hearing such a beautiful piece in its original form.

The Legendary Demos can be seen as something of a greatest hits album, a snapshot into the early work of a songwriter developing into her prime. The demos here may be cheaply recorded and lacking in sound quality but there is nothing lacking in the quality of the songs, which are seen in a new and very welcome light.