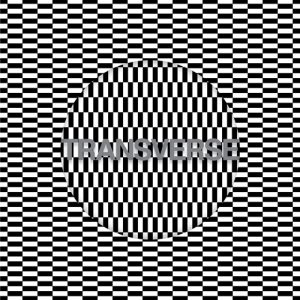 If you stare at the sleeve of Transverse for too long, you can see your future. Or a picture of a cat playing the piano. One or the other. And when the sleeve is that hypnotic, imagine what is contained within.

This is an album capturing a moment: a recording of Carter Tutti Void‘s performance at Mute’s Short Circuit festival held at London’s Roundhouse in 2011, for which these pieces were specifically composed.

So it’s a live album, but whereas those can often be staid, bloodless affairs, missing the necessary sensory stimulus of being there, Transverse manages to capture the sheer trance-like intensity of proceedings.

Carter Tutti Void are not, as the name may suggest, the hippest solicitors never to raise an eviction notice. They are in fact Chris Carter and Cosey Fanni Tutti, formerly of Throbbing Gristle, and Nik Colk Void, currently of Factory Floor.

Which makes it a collaboration between veteran and fresh faced noisemongers. And, it is fantastic. The four tracks, functionally named V1 – V4, each clocking in at around the 10-minute mark, are heaving maelstroms of sound. A dark, foreboding and thrilling trek which is, perversely, both off-putting and magnetically entrancing.

There’s also a real humanity – something distinctly organic – about these pieces. They develop like fractal patterns, growing and repeating geometrically, but then you’re never far from another unexpected tangent arriving. Another burst of bass, of scratched, distorted guitar to give the thrilling impression of it being something constantly evolving, before your very ears.

V1 stems from a heartbeat of a snare. An insistent metronomic pulse from which tears and pulses of noise rise, like the bubbles on a pan of simmering primordial soup. Then there are clicks and clatters, and you’re caught in a deepening fug of something wonderfully hallucinogenic.

V2 is heavier and creepier. Clanking with industrial purpose, flashes of static-drenched white noise appear and depart, and Tutti’s distorted voice writhes through the fog. Then the screams and squeals of Void’s bowed guitar knife through.

V3 sounds like a sonar beacon pulled through a rip in the space-time continuum. It oscillates and resonates, creating a swirling mass with an impression of vast depth. V4 is glitchier, skittering, but with a heady, fuzzy, throb to it. It’s like your speakers have caught a head cold.

There’s endless fun picking away at each track, and it’s amazing how often you can find new strands. But rather than look at it piecemeal it’s actually better to treat Transverse as a whole. A marvellous four sided demonic groove.