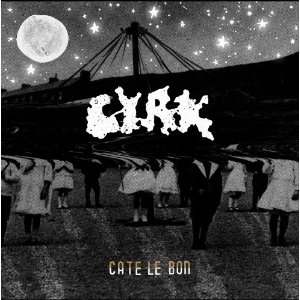 Cate Le Bon’s second full album looks to build on the potential established on her 2009 debut record Me Oh My. When that was released a lot of the interest in her centred around her participation on the Neon Neon record, where she performed with friend and collaborator Gruff Rhys, but since then her style has assumed a very different trajectory.

Le Bon (who, it should be reminded, is about as far removed from Duran Duran as you could get, too) is good friends with Rhys still, and has signed to his own Ovni label for the release of an album that explores her pleasingly off kilter, left of field approach. The lo-fi feel of Me Oh My remains, but where the suspicion with that album lay in the underdevelopment of some of its songs, the songwriting for Cyrk – the Polish word for ‘circus’ – has moved to an appreciably greater level, with some well crafted numbers that allow for bursts of unpredictability and psychedelia.

The chief appeal lies in Le Bon’s voice, which is largely untreated and left to its own accord here. She has a lovely tone that can be projected with wide eyed innocence when the falsetto is employed, but which now and then has a hint of menace or a sense of darkness around that edges, giving way to the feeling that not is all quite as it should be.

After the bluster of 12-bar blues variant Falcon Eyed, Puts Me To Work slips in to a pair of more comforting shoes, its pleasingly low profile immediately attractive. This juxtaposition of fast and slow, animated and cool, mischievous and dark, makes the album work as well as it does. To counter the mood changes it is clear a lot of thought has gone in to the often woozy or psychedelic instrumentation that accompanies the chanteuse.

The macabre dream waltz that underpins the title track gives a strange feeling on headphones, as if being on the outside of the circus looking in. “Now is not a good time to leave me on my own,” protests Le Bon lightly, the music trying to counter her mild distress with an aggressive, mid song struggle. The vocalise in Greta, mixed with a distracted trumpet , is a weird blend of comfort and restlessness, especially when the march-like tread of the snare drum assumes centre stage. The Man I Wanted, meanwhile, employs an identical chord sequence to The Verve‘s Lucky Man, but ends up being the polar opposite in almost every way.

Le Bon has a very distinctive vocal style, and writes closely intimate songs that prove especially personal for headphone listeners. It’s when listening in this way that the nuances of the music, with its dark underbelly, open up and reveal themselves in a weird yet absorbing way.