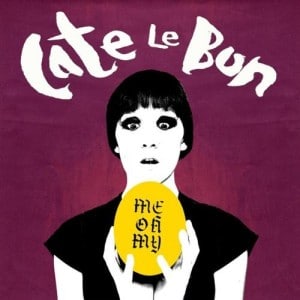 Cate Le Bon is not, if you were expecting a continuation of the recent phenomenon of celebrity offspring, the progeny of Simon and Yasmin.

Instead, the Welsh singer is the prodigy of Super Furry Animals‘ Gruff Rhys. She has supported Rhys on tour, collaborated with his synth-pop side-project Neon Neon, and Me Oh My is the debut release on Rhys’ new label Irony Bored.

Probably unsurprisingly, Le Bon’s music shares a certain quality to that of Super Furry Animals. There’s the same woozy feeling to most of the songs, albeit with a much more stripped down quality.

Le Bon’s vocals will be the main topic of debate. Her Welsh vocals sound slightly flat and Germanic at times, bringing to mind 2009’s most oft-referenced lady of legend Nico (cf. Lissy Trullie, George Pringle). There’s certainly an air of the Velvet Underground‘s work with the German songstress, especially on the opening title track which has an air of Pale Blue Eyes about it.

Just as Le Bon’s voice will split opinion, the songs on My Oh My probably will as well. There’s a deeply melancholic air to each track here, with the stripped down sound having a rather ghostly effect. Every so often the band kicks in, but mostly it’s just Cate and some sparse instrumentation.

Atmospherically, it works well, yet there’s nothing that really stands out. No one track really grabs the attention like it ought to, and although Shoeing The Bones and Eyes So Bright are pleasant enough, there’s not much that would persuade you to come back for many repeated listens.

However, Hollow Trees Hollow Hounds has a nice, ’60s garage pop feel to it, while Sad Sad Feet, probably the standout track, is wistful and quite beautiful with Le Bon’s eerie vocal sounding at its best. The lyrics are nicely cryptic throughout, with a sense of impending doom hinted at in parts (“baby I’m headed for the black”).

Yet it’s all a bit uneven. The droning Terror Of The Man becomes wearying after 30 seconds or so, never mind the song’s full duration of nearly five minutes. Elsewhere, tracks seem to be float by, leaving no discernable impression – sometimes it’s more mood music than anything else.

All in all, Me Oh My is probably an acquired taste. There’s no denying that there are many moments of fragile beauty, and there’s certainly a lot of promise. But the songs will have to be a bit stronger for Cate Le Bon’s second time around.