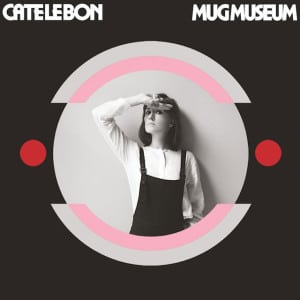 Even if not quite as quirky or captivating as last year’s great Cyrk, Cate Le Bon’s new album Mug Museum allows her to show a darker, more mournful side of her always-on-display personality. Written after her maternal grandmother passed away, Mug Museum might not help Le Bon evade the Nico comparisons she’s garnered for most of her career (especially as the album has been released so close to the death of Nico collaborator Lou Reed). But it adds another fine collection of songs to her already impressive catalogue, songs whose inwardly-focused subject matter renders the music more restrained than the punky pop of career highlight Cyrk.

A main point of difference between its predecessor and Mug Museum is noticeable from the beginning. While Cyrk faded in with the almost The Strokes-like post-punk of the wonderful, buoyant Falcon Eyed, Mug Museum’s opening track, I Can’t Help You, has the wistful, pseudo morose (even if still poppy) tone to counter its titular negativity. But taking into account the lyrics independent of the song’s sound, I Can’t Help You is a radical departure from anything on Cyrk, as Le Bon sings “Split me like timber” and “Beat me like egg yolks” in her characteristic yawny delivery. It’s as if her self-destructive qualities are shielded from the listener by a sort of self-defence mechanism.

Similarly, on I Think I Knew, Le Bon duets with the king of hurt, Mike Hadreas of the excellent Perfume Genius, to create a song whose longing matches the aspirations of its chorus (“I wish I knew” conjugates with “I think I knew”). While Perfume Genius can come across as self-serious, Le Bon’s handling of tough subject matter here – whether a defence mechanism or not – allows both him and her to create a good song that doesn’t wallow in its own self-pity. I Think I Knew is likely to garner comparisons to Jens Lekman songs like A Postcard To Nina, and not just because of its glockenspiely percussion. The song’s sad yet still innocent aura recognises, as does Lekman, that life brings its troubles, but is not all that terrible; and at times it can be quite absurd.

Still, what was most impressive about Cyrk was that it was diverse and cutesy but still managed to sound cohesive, a quality that allows it to rise a little above Mug Museum. Mug Museum, on the other hand, contains a few tracks that work on an individual level but distract somewhat from the overall stylistic cohesion of its excellently formed depressed/apathetic aesthetic. Wild, namely, is an aggressive, distorted song whose shouty chorus, consisting solely of its title, is dissonant. Moreover, Le Bon’s vocal delivery on the choppy, minimal Duke shifts too quickly from apathetic to a forceful soprano, the climax being almost painful to listen to. If songs like Falcon Eyed showed that Le Bon has the potential to switch radically from one style of delivery and guitar playing within a song and still make it sound natural, Duke disappoints.

Another track that sits awkwardly on Mug Museum is, ironically, its best track, the penultimate Cuckoo Through The Walls. A slow-burning psychedelic track with a riff reminiscent of Link Wray’s Rumble combined with Crimson and Clover, it’s far and away the album’s longest track and plays unlike anything Le Bon has ever recorded. It combines her newfound penchant for reverb with her personality; for who else would sing that a cuckoo through the walls carries the sound of symphonies? Midway through, the song breaks down into Reed-like noise, underlining that it would have fitted well on Velvet Underground & Nico, and cementing Le Bon as the Nico of the 2010s in so doing. Like Nico, Le Bon recognizes the pop song as an artistic statement.