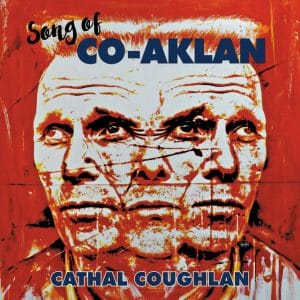 Cathal Coughlan has had a career stretching back over 40 years and, although he was once an unlikely support act for none other than U2 during their ZooTV tour, he’s never remotely troubled the charts. He has, however, successfully garnered a reputation for being one of Ireland’s most enduring and acclaimed songwriters.

Coughlan began back in 1980 as one of the founder members of Microdisney, the influential Cork rock/pop band he formed with Sean O’Hagan. After that, he went on to release several albums as Fatima Mansions in the early ’90s, and embarked on a number of collaborations with the likes of Luke Haines and the late comedian Sean Hughes.

Song of Co-Aklan is Coughlan’s first album under his own name in over 10 years, and features a number of those collaborators making return appearances. Following the one-off Microdisney reunion in 2018, O’Hagan pops up, and fellow maverick curmudgeon Haines can also be found on the credits.

This is very much Coughlan’s record though, with his extraordinary personality stamped all over it. He’s an artist who has been frequently compared to Scott Walker in the past, and there’s that sense of theatricality and drama to many of the songs on the album.

Yet for someone with such a fierce reputation, there’s a surprisingly accessible feel to much of Song of Co-Aklan. The title track, which opens the album, has a lovely, breezy singalong chorus – it’s only towards the end of the song that a squall of guitar noise threatens to overwhelm the song. The Knockout Artist is also upbeat and catchy, despite some dark lyrics talking of traps and “cranium hacks”.

Other tracks are less immediate but no less rewarding. Owl In The Parlour is discordant and woozy, with hints of mid-period David Bowie, and The Lobster’s Dream is a languid, surreal ballad which builds slowly but effectively. Lyrically, Coughlan is as obtuse and poetic as ever with unsettling imagery on nearly every track.

Passed Out Dog talks of “human bone meal in my hair”, and Let’s Flood The Fairground takes aim at modern-day politics by looking at “aliens for blaming, and poor folks for defaming”. That’s not to mention the haunting qualities of My Child Is Alive, which tells the story of a man trying to escape his past, which ends with a robotic voice (similar to that in Radiohead‘s Fitter Happier) intoning self-help platitudes.

Musically, there are nods to Coughlan’s chequered career throughout the album. There are hints of the intelligent indie-pop of Microdisney in the title track, while the more caustic edge of Fatima Mansions is brought to mind in tracks like St Wellbeing Axe. Coughlan is in fine voice too, with that deep rich baritone bringing the characters of his song unerringly to life.

Song Of Co-Aklan is unlikely to win any fresh converts to Cathal Coughlan, despite it being more commercial than a lot of his output. For those who have fallen under Coughlan’s spell though, there are plenty of new treasures to discover in a fine summation of one of music’s true maverick characters.