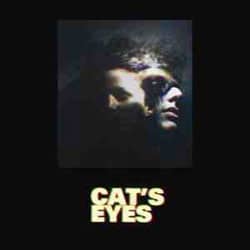 So you’re out with a new group of friends and you’re feeling your way through those first furtive conversations. You’re keen to not make a dick of yourself, but equally keen to position yourself as a cool and groovy sort, with a broad and varied lifestyle.

The first questions get asked: what do you like, what do you do. But then realisation smacks you. You know, you just know, that the smarmy bastard due to answer before you is one of those people who has done everything. Who’s amazing at everything. Who has so many strings to their bow that they’ve had to replace it with a rope.

Faris Badwan (quote: “The singer with British band The Horrors“) must feel like that every time he reads anything written about Cat’s Eyes, his new side project with Rachel Zeiffra (quote: “classical multi-instrumentalist, renowned opera soprano”).

Poor Faris. Not that he should be bashful about his achievements, given the acclaim lavished on the last Horrors album, but it’s hard to compete with a classical multi-instrumentalist who’s also a renowned opera soprano. You tend to sound like you’re reaching. Yes, you were nominated for the Mercury Music Prize, but are you a multi-instrumentalist? No. World renowned? No? Can you, by any chance, sing opera? Thought not. Let’s get back to talking about Rachel.

It’s probably also fair to suggest that back when The Horrors were screaming about parasites and ripping through blasts of Cramps obsessed noise, it would be hard to envisage the lead singer forming a side project with a multi-instrumentalist opera soprano. But here we now are, so let’s not worry about it unduly.

Cat’s Eyes is an odd little thing. A tremendously elegant updating of ’60s, Phil Spector-esque pop, capturing both the romance, the drama and the (usually quite carefully hidden) darkness of that particular era. So the first thing you’ll find is that it’s actually physically painful to not be doing the mashed potato while listening to the album opener, Cat’s Eyes. Which has got to be a good thing.

Elsewhere, Best Person I Know wafts along ethereally, Zeiffra’s voice only tethered to the elegiac tune that exists underneath with the most gossamer of threads, while Bandit is what These Boots Are Made For Walkin’ would have been had Nancy Sinatra been either Good, Bad, or Ugly.

The entire album manages the not easy trick of sounding both epically widescreen and soufflé light. The orchestral sweeps are subtle but poignant, and they cleverly utilise the stark differences between Badwan’s gothic baritone and Zeiffra’s cool sighs.

It’s an album that is truly surprising. It’s clever enough with the homages to properly capture the spirit of the period they are referencing, but smart enough to not ever just pastiche it. Chalk another one up to the multi-instrumentalist opera soprano. Oh, and that guy from The Horrors.