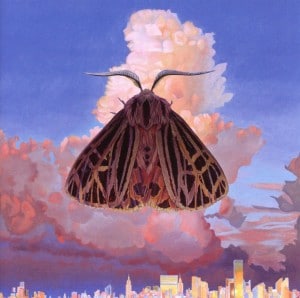 Hailing from Brooklyn, New York via Boulder, Colorado, where they originally formed back in 2006, Chairlift are one of a seemingly endless conveyor belt of self-consciously clever, achingly hip bands to emerge from the Big Apple’s coolest borough over the past decade or so. Comprising of singer Caroline Polachek and multi-instrumentalist Patrick Wimberley, their 2012 second album Something marked out their territory as purveyors of angular, slightly chilly and warped electro/R&B; a difficult to pin down flurry of skittering rhythms and vocal gymnastics from the impressively elastic Polachek.

There was however a definite lack of memorable songs which prevented Something from standing out from the crowd, and by and large this stumbling block has not been removed on new album Moth. Often complex and inclined to branch off in surprising directions, the 10 tracks here are frequently intriguing but the disparate elements don’t always coalesce into a compelling whole.

Chairlift are at their best when they rein in some of their weirdness into more conventional structures. Second track Polymorphing, which recalls Dirty Projectors in its off-kilter approach to R&B topped off by Polachek’s high, yearning vocal, is a good example of where the band really do nail it, while Moth To A Flame reels you instantly with its bouncing melody and squelching funkiness. Romeo is probably the pick of the bunch – a radio-friendly hit single in waiting with its pulsing, urgent energy neatly complementing a lyrical theme based on running from potential romantic suitors, with Polachek proclaiming “I’m going to run/ ‘Til you give me a reason to stop/ To fall on my knees”.

A close second is Crying In Public, the closest Moth has to a pure pop song and with distinct echoes of early Prefab Sprout in its chiming synths and unexpected chord changes. Elsewhere though, too many songs fail to hit the mark, often suffering from a frustrating inability to stamp their authority on the listener. Unfinished Business starts promisingly with its mellow, muttering electronica but never accelerates beyond plodding pace, while Ch-Ching can’t decide whether it wants to be a rabble-rousing dance floor filler or a soulful lament. Ottawa To Osaka is little more than five minutes of jerky, tuneless filler and both the opening and closing tracks (Look Up and No Such Thing) are rather lacklustre, if pleasant enough choices to bookend the record.

Overall, what Chairlift have given us is a curate’s egg of an album; some of it good, some of it frankly inconsequential. While Moth does benefit from repeated listens to allow some of its subtler qualities to embed in the brain, perhaps the fairest conclusion to draw is that Chairlift are still are band in development. They can’t quite decide whether they want to be a bona fide R&B act or more of an experimental electro duo and the meetings of the two influences aren’t always happy ones. On Moth, Chairlift for the most part lack the swaggering confidence of contemporaries like Santigold, or the idiosyncratic yet accessible songwriting of Dirty Projectors. It’s by no means a bad album, but at this stage Chairlift are strictly second division.