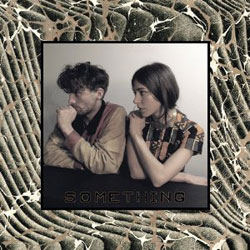 In the hyperactive sped up hype cycle of 21st century music a four-year gap between albums is an incredibly long hiatus. Way back in 2008 New York experimental pop group Chairlift were being touted as being among the leaders of a new wave of electro tinged art pop groups who would all go on to have great success. Chairlift, however, were a bit too slight a proposition to really merit that hype back then, and their debut Does You Inspire You was scrappy and unfocused and only marginally hinted at their art pop potential. Returning four years later as a duo after the departure of co-founder Aaron Pfenning, Chairlifts second album Something is an altogether bigger, bolder and slicker proposition.

Chairlift’s return has had a rather protracted gestation. The album was delayed subject to a legal battle between the departed Pfenning and his former girlfriend Caroline Polacheck over the rights to carry on with the band’s name. The band decided to carry on as a duo. Polacheck’s influence and personality is writ large all over Something, as she comes into her own as a fully-fledged great pop singer.

While their breakthrough hit Bruises was quirky and hook filled but rather twee, the 11 tracks on Something are mostly incredibly assured and sophisticated electro pop. The songs may be shorn of the quirks of some of the more scattergun genre dabblings of their debut but they more than make up for that with effortlessly brilliant pop hooks a-plenty. Opener Sidewalk Safari is a bit of an anomaly, but its bewitching concoction of bubbling synths and mannered vocals are an excellent introduction to Something’s charms.

I Belong In Your Arms is a glorious surge of AOR tinged electro pop that sounds much like a synth pop version of ’80s vintage Fleetwood Mac while the equally sprightly Ghost Tonight and Take It Out On Me both recall the ’80s inspired pop sound of Ladyhawke but with the innate weirdness of Chairlift shining through to spellbinding effect.

At times, Something baffles with its 1980s influences. The stately ballad Cold As A Fire sounds like something that could have come off one of Whitney Houston’s early albums, though its overblown, sickly sound is one of very few weak points on an album that gets better as it progresses.

The singles Amanaemonesia and Met Before are both outstandingly good pop singles, the former’s electro bounce is hugely addictive while the synth blasts and soaring chorus of the latter are thrillingly exuberant. Polacheck’s clear and pure voice sounds full of joy as she delivers the chorus line: “Have we met before? Amongst the buzzing? Clear like yesterday when you smile” It is a line in keeping with the album’s air of positivity; this is certainly not a morbid break up album.

Frigid Spring offers a curious diversion with its meandering folksy guitars and Turning’s submerged and sleepy vocals are a lovely dreamy interlude, but perhaps the album highlight comes in the shape of final track Guilty As Charged. A gloriously simple waltzing melody is the accompaniment as Polacheck offers up her explanation for her break-up with her former band mate: “If I gave you all you’re asking for then you wouldn’t want it anymore, so I won’t”.

If anyone was intrigued but underwhelmed by Chairlift’s debut then they will find much to be impressed with on a second album that is focused, coherent and, more importantly, absolutely chock full of excellent pop songs. It may have taken Chairlift a while to get there but they are finally coming good on the promise they showed all those years ago and becoming a truly accomplished pop group in the process.