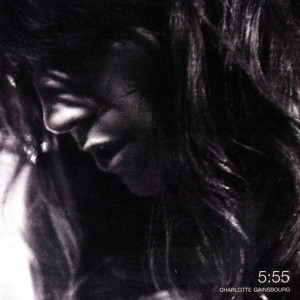 Actress Charlotte Gainsbourg, daughter of Serge Gainsbourg and Jane Birkin, has teamed up with Air, Neil Hannon and Jarvis Cocker to write 5:55. Produced by Nigel Godrich, it is a wistful concoction of whispery vocals and twinkling musical arrangements.

Unfortunately for Charlotte, as with many offspring of famous parents, she finds herself aged 35 and still in the shadow of her parents. This state of affairs has more to do with the affection in which her father in particular is still held than her abilities, but it has to be asked whether such illustrious collaborators would have been brought together for Charlotte herself had her surname been anything else.

Those same names could collectively be a stick with which to beat her. Here is a girl who enjoyed chart topping success – with a duet with her father – and who then somehow managed to steer clear of a recording studio for two decades. What if the album’s not up to scratch? You might blame one of her collaborators, but it’s difficult to blame them all. Thus Charlotte makes a sizeable rod for her own back.

The flipside is, everyone involved seems to work well together. Charlotte’s vocal delivery alternates between whispery chanteuse and spoken narration, as though she is channeling either of her parents, and at no point does she ever attempt any big notes. Her English accent is necessarily Frenchified so that “knife” becomes “knoife”, but she only goes French for one track, Tel Qye Tu Es.

This style works well with Nigel Godrich’s production style, with echoes sucked out of the mix to leave an airless place in which deadended sounds shimmer in and out. The album’s more velveteen tracks – the single The Songs That We Sing, Jamais and Little Monsters – are memorable highlights, but with sumptuous piano running through much of the record, the listener’s liking or otherwise of that instrument may well determine whether the record is enjoyed.

Cocker and Hannon’s lyrics, certainly penned with a nod to their muse’s old man, also recall their own themes. AF607105 guides us around an aircraft in flight, featuring stewardess announcements and words associated with air travel – a possible counterpoint for Hannon’s Billy Bird. The Operation sounds much more like Cocker, a more visceral lyricist than Hannon – “I want to explore you, I’m gonna get under your skin, so you can feel me running through your veins…”

Musical arrangements throw up recognisable Cocker combinations here and there but the songs, penned by Air duo Nicolas Godin and Jean-Benoit Dunckel, feel very much like their own. (Air must have needed a challenge – Dunckel has his own solo record following this one by a fortnight under the Darkel moniker.) And atmospherically there’s more than a little smoky salon about the record

Instrumentation includes triangles, glocks, strings and piano all working together to create a shimmery dreamscape through which Gainsbourg wanders, whispering and enunciating at her surroundings with a mix of wonder, matter-of-fact narration and world-weariness. By its end we are no closer to knowing what makes Charlotte Gainsbourg tick or whether she will sustain a music career to complement her acting, but perhaps such mysteries are best left unsolved.