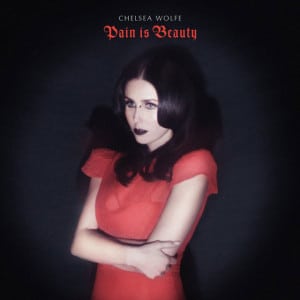 Fourth time’s a charm. Sacramento, California singer/songwriter Chelsea Wolfe has finally reached her incredible potential with Pain Is Beauty, a stunning collection of darkly inspiring songs that are more fully realised than any of Wolfe’s previous three albums. With just enough of a gothic, deadly touch to give the album a sense of urgency but not enough absurdly dark matter to derail from its focused and nuanced sense of woe, Pain Is Beauty hits all the right notes.

The album captivates from the off with the opening thump of Feral Love’s drums, but the first truly excellent track is the second one, We Hit A Wall. Not only are the arrangements complex, but the simple, almost arpeggiated way that Wolfe utters the song’s title (which is also the opening words) is powerful, yet delicate when considered in conjunction with the track’s militaristic drumming. We Hit A Wall evokes the same emotions as the brooding stoner shoegaze of True Widow, one of Wolfe’s recent tour partners: simultaneous dread and ecstasy.

But where True Widow’s music is notably free of strong emotion, Wolfe’s wuthering wail, by no means overblown, is subtle, yet devastating. Same goes for the lush string arrangements of House Of Metal. In conjunction with warlike drumming and a glockenspiel, House Of Metal’s percussion and orchestral swells allow Wolfe’s voice to take a step back while still providing notes of atmosphere to the overall composition.

Moreover, Pain Is Beauty not only shows Wolfe’s penchant for atmosphere but for stylistic diversity. Both Feral Love and The Warden display elements of electronica, the latter sporting a medieval, arpeggiated, synth touch. Both of these tracks are certainly industrial-sounding, but Wolfe’s soft voice allows them to breathe, her cold-as-ice sensuality rendering less dark the guitar riffs and doom-filled lyrics. And the next track, Destruction Makes The World Burn Brighter, is like the girl group pop of Dum Dum Girls meeting the grungy bleakness of EMA.

And then comes Sick, a drone-laden musical manifestation of withering away. “I’m not the kind of sick that you can fix,” sings Wolfe. But she continues, “Don’t worry about me baby / I’ve got no enemies and I’ve got no time.” She didn’t deserve to die, but there’s nothing you can do. Such is life; on Pain Is Beauty in general, Wolfe doesn’t pull any punches. The brutal honesty of the album’s title is certainly reminiscent of the themes she explores: namely death, disease, and loss.

Which all leads up to the album’s amazing emotional climax, the eight and a half minute long penultimate track The Waves Have Come. It’s long, melodramatic, and epic, and it builds perfectly. Starting with isolated piano and sounds of waves in the background, Wolfe’s layered, crying voice enters. She sings from the perspective of someone who has survived a natural disaster and ostensibly lost a loved one (the track was supposedly inspired by 2011’s devastating Japanese tsunami).

Just when the rest of the instruments drop out as Wolfe sings “This will be ours,” the music builds back up, as if to torture the subject of the song and say “No”. And for an album that often employs militaristic drum beats, those of The Waves Have Come are absolutely necessary, providing an incredible urgency and placing you in the shoes of the victim. But don’t think that this song – and Pain Is Beauty in general – is by any means over the top or that it could soundtrack a disaster film. Wolfe’s realism isn’t magical; it is real.