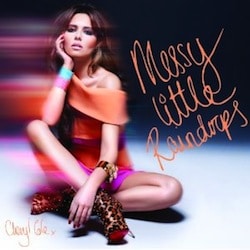 Cheryl Cole, is the ideal example of a second-rate pop star: a warmed-over personality, recycled hooks, some blatantly silly self-help wordplay, and half-assed production. Cole’s sophomore album, Messy Little Raindrops, may not be pop at its most boring, but it’s definitely pop at its safest.

The album misses the mark on so many levels it’s hard to really start anywhere in particular. But, the problem that juts out most uncomfortably is that Cole’s many songwriters’ have the ability to write some incredibly heartfelt, but incredibly stupid, rhythmically awkward lyrics. “Hope you know you’ll always have a place to call your home. Still, I can’t help but think, I could have saved you from drowning”.

Aside from the fact that this particular couplet comes completely out of nowhere, consider the chorus: “But you can’t hold on to water. It fills you up but never stays. It’s only good to wash away, today. And you’re loving me like water.” It’s a silly thing to base an entire song around, and what’s more, songwriters Priscilla Renea and Wayne Wilkins seem to have forgotten that “home” and “drowning” don’t even pretend to rhyme. It’s a grave lapse in songwriting, and fundamental guffaws like that reappear on the record far more than we the listener ought to be comfortable with.

Messy Little Raindrops doesn’t always hit those egregious lows, but that doesn’t stop it from sounding utterly lazy. Is there a more played-out move than sampling The Big Beat in a pop song these days? Let’s Get Down doesn’t care, and lets Cole put on what could literally be the most flat-footed attempt at a dance-floor anthem of all time. The production certainly doesn’t have its head in the game. Cole sings, “Me and my girls walk in like Sex In The City“. But, she just doesn’t have the minx-y seduction she’s aiming for – and that all goes down before will.i.am. ruins the song with an auto-tuned verse of his own.

Messy Little Raindrops goes for the lowest common denominator every chance it gets. A slow, but spirited breakup-remedy? Get those backwards strings from Moby‘s Porcelain. What’s the lead single? Grab the track has the grimy Gaga synths. The ballad? Give her a piano and a light layer of ethereal mist around her voice. This is near unforgivable. It’s backwater pop at its most blatantly needless. The world simply doesn’t need more people making music like Cheryl Cole.