Cheval Sombre – Time Waits For No One 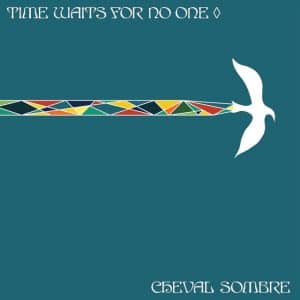 The pace of life has been a consideration at the front of all our minds in the last year, and not least for Chris Porpora – the New York musician behind Cheval Sombre, making his first album since 2012.

The gap between albums gives in indication of the speed at which he operates, but it has also given him time to think. In his music Porpora’s priority is to give people sanctuary from a world that moves too fast, and the pandemic has given him optimism that the pace of life has at last begun to approach a realistic speed, one at which his music moves.

For this is properly slow music, each chord change taking its own sweet time, and each vocal lovingly prepared and delivered. The care and attention to detail in the notes themselves is worked out against a woozy, psychedelic backdrop, where images are distorted or only partly formed. This gives the listener a dreamlike experience, able to focus in on the intimate thoughts close at hand, or to pan out to the dappled colours beyond. The drawn out method of delivery gives Cheval Sombre’s music its own special intensity, with everything unfolding at a natural and inevitable pace, like travelling on a hot air balloon journey through the stratosphere.

Porpora is greatly helped by the keyboards of Sonic Boom, who produced the album, and the string arrangements of Gillian Rivers and Yuiko Kamakari. The way the violin lines bond together in an intricate tapestry lends a special air to Dreamsong, while Curtain Grove blossoms into a richly coloured flower of brightly shaded instruments.

On first listen Cheval Sombre’s vocals have a slightly distracted air, but the more you hear them the more meaningful they become. The title track has a telling lyric where ‘time waits for no-one, time waits for me’, spelling out that the only person able to create time for yourself is you. There is a great deal of understated emotion in his delivery, and this comes to the fore in Had Enough Blues. Using recollections of terrorist attacks in Paris, the track becomes an elegy for the victims of the Champs-Élysées terror attacks in April 2017. A single string line moves serenely against the background, a vapour trail in the sky.

There are very few drums in this work, but songs such as Hitch A Ride illustrate how the music of Cheval Sombre could project to a live environment with cavernous, booming percussion, operating along the same lines as the best of Primal Scream’s early music. Even through this performance method the intimacy of his slow burning songs would remain, for these are compositions that flicker with light in a world of darkness.

To get some real time out in these trying times, shut down anything with a notification and give Time Waits For No One your full attention. You will not be disappointed.