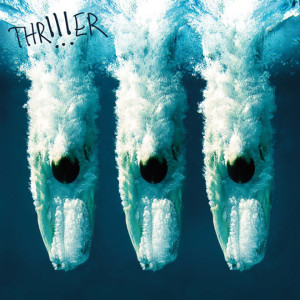 It’s taken three years – THREE YEARS !!! – since there was so much as a peep out of dance-punk Sacramentans !!! (Chk Chk Chk). But they arrive, true to form, on the wave of their own special brand of shtick – one of the very things that made us sit up and take note of 2004’s sublime Louden Up Now. And that brew, this time around, has produced a blend of both killer and filler which to another group, might render that album title a somewhat hollow statement.

Not for !!!. Who else but a band that uses three monosyllabic sounds for its name would dare to christen their collection of nine tracks with something that’s merely a cat’s whisker away from one of the most famed of all time?

This, their fifth full-length offering, seems to justify its title’s veritable sashay into the room, with the emphatic introduction, Even When The Water’s Cold. A cynic might say that 2010’s Strange Weather, Isn’t It? sufficiently buffered the more critically acclaimed earlier material. And while memories of club thrills to Hello? Is This Thing On? haven’t entirely been stifled by time, genuinely, the opener here is among a handful of the collection with the kind of mischievous glint in its eye that only appears when a band really knows they have produced something that’s bang on the money.

Nic Offer’s usually confident swagger is no less restrained, backed by waa waa-ing funk guitars that won a battle over !!!’s previously-preferred punk dinner guest. Camp pop blends with a touch of Jarvis Cocker’s stylistic disinterestedness, but the point of sale is a chorus that worms its way into the frontal and temporal lobes in the brain, with a dab of slapped bass and a close with more than a passing resemblance to the chanting schoolkids of Pink Floyd’s Another Brick In The Wall.

Another of the flag bearers is Get That Rhythm Right – its insistent groove recalling the Nike-commissioned runners’ favourite, 45:33, from LCD Soundsystem. Soulful sax and sultry vocals are mood-led, giving a freeform illusion, but tight, studio production gives their game away. !!! reckon Jon Eno said they should no longer be trying to capture their live performances in recordings, and on this evidence, that advice has borne fruit.

A confidence and reliance on a winning chorus to tickle the synapses appears in One Girl/One Boy, with sunshine and funk-infested guitar pop, Scissor Sisters-style unabashed falsettos and a ’70s air that’s been dragged into the production present. Meanwhile, the band created their own ‘samples’ on lead single, Slyd – its house beat paired with the gum-chewing back-of-the-bike shed vocals of Teresa Eggers and Molly Schnick, where double-entendres elicit lines like “I like you on the inside” with a cheeky wink. Woody, bass touches are laid with mathematical precision, gradually lifting the curtain on the showstopper it becomes.

Creative steam flags sporadically around halfway into the album, causing attention to falter through Fine Fine Fine, whose angular riffs and sharp drums pump darker punk into the LP, stroked rather awkwardly by David Bowie and Duran Duran influences. Californiyeah’s backhanded affection for The Golden State ends better than its disappointing beginning, as does Except Death, where a guitar solo performs a caterpillar-to-butterfly transformation.

A sagging back half is given a leg up by Careful’s flamenco guitars and Kraut-inspired techno beat, but it serves as a frustrating reminder of how erratic !!! can be. For that reason – the same as on other studio albums – it’s hard to build genuine affection or loyalty towards their recordings, especially when the band give so much more of themselves on stage. But that obvious thriving on attention is perhaps the very thing that, in a live setting, satisfies their inner hunger. THR!!!ER has plenty of moments that live up to its self-hyped billing, but it’s the love of the gimmick, that old friend Shtick Shtick Shtick, that will always be the thing that both endears and estranges.