Chloe Foy – Where Shall We Begin 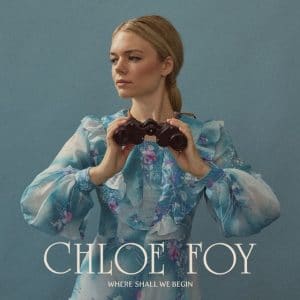 Chloe Foy‘s debut album has been almost a decade in the making. The Gloucestershire-born, Manchester-based songwriter has been playing gigs and releasing EPs for quite a while, but it’s still taken some time for Where Shall We Begin to see the light of day.

The backstory to her debut gives some idea as to why it was important to Foy to take her time. Her father was a talented artist and potter, but decided to take an office job for financial security. Depression eventually took his life. The sense of regret and sadness is palpable through Foy’s debut, as is her determination to pay tribute to her father.

So there’s an elegiac feel to most of Foy’s debut album. There are hints of Laura Marling and Vashti Bunyan to some tracks, and as with those two artists, there’s a very English sensibility to Foy’s music. It casts a very specific mood from the outset, but also manages to remain accessible – indeed, tracks like Asylum or Left-Centred Weight could easily become crossover hits.

Foy’s lyrics are honest and heartfelt. As It Goes looks at how her mother dealt with the loss of her partner. The title track, which opens the record, confronts her father’s death straight away: “Death to those who wait, likely it’s too late” before ending with the heartbreaking line “hold on… you’re gone”. It’s a startling, and impressive, way to open the album.

Elsewhere, things are less intense but no less beguiling. Evangeline is just gorgeous, a steadily building ballad embroidered with an organ and string section. Asylum is another highlight, with a Gaelic folk influence, while Deserve sees Foy take a swerve into more ‘indie’ territory, bringing to mind the likes of Sharon Van Etten or early Marika Hackman.

Foy’s father is, understandably, the figure that looms large over the whole record. Shining Star tells of a man “married to a life that pays” and serves as a warning to always follow your dreams, no matter how scary they be. Left Centred Weight is more abstract but its allusions to mental health and pleas to “go easy brain” are clear. Bones is probably the most intense, unsettling moment on the album – despite the beautiful harmonies, there seems to be something uneasy nestling beneath the surface.

The production, by Foy herself together with Harry Fausing Smith, is perfectly judged, coating these songs in a warm yet otherworldly air. It’s unlikely that you’ll hear a collection of songs so striking and attention-grabbing. And, as impressive as this debut album is, the most exciting thing about it is that it hints at even greater things to come. Ensure you’re here at the start before Chloe Foy goes supernova.

More on Chloe Foy
Chloe Foy – Where Shall We Begin