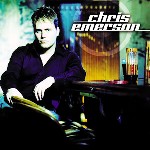 Dawson’s Creek aficionados might have heard of Chris Emerson, as he sings the song All Because of You as heard in the said glossy soap. Most other people however, will not have, and lucky indeed they are. Even in the dreadful, I can usually hear some tiny notes of interest. Unfortunately, in Emerson’s debut LP, I can find little such comfort.

It begins like every music nightmare with an over produced drum fill into cheesy guitars. “You’re so young, you’re so jaded, look of hunger in my eyes” being the opening line, and I know I’m in for a long long night.

Repeated listing does nothing to ease the pain. Nothing Stays The Same is a slower version of the first song, emotive balladeering that starts all strummed guitars and whispery verse followed by an angst ridden big chorus.

All Because Of You starts with what has to be the most overused lyric ever, “Just yesterday morning I wrote down this song / thinking about you and what went wrong” and as it gets progressively more tormented I too become more and more anguished. Only David Sneddon on Top of The Pops usually elicits this kind of reaction.

Baby’s Gone is another ballad akin to the previous and as Broken Heart breaks the mould slightly with some pleasant harmonies that slip away to lead again into guitar and drum heavy rock pop, I wait for a surprise but it simply does not come. Even the song penned by hugely successful songwriter Diane Warren is love by numbers, and I’m bored and blas�.

Emerson has a writer’s credit in all but three of the eleven songs, and of course, that is to be applauded. Indeed, his songs could lead a ‘write MORE songs by numbers’ college course and this has in fact gladly revealed itself as the tiny fleck of interest in this LP.

The promotional blurb reads “the albums’ blue-eyed soul-based roots rock with a shimmering pop sheen is tailor made for radio and a wide demographic” and in America, that may well be true. England, however, is an entirely different market. This album is perfection in soft rock pap, but do we really need another such tunesmith? America maybe – England, never.