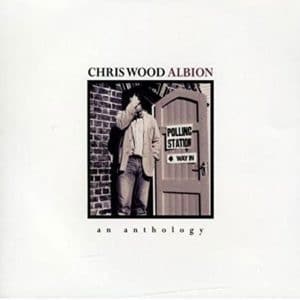 Folk music has been bending itself into some weird and wonderful shapes of late, and so it is odd how refreshing this compilation of one of the great modern traditionalists sounds.

Chris Wood has been knocking around the folk scene since the early ’80s, releasing solo material, duo albums with button accordionist Andy Cutting, and work with the English Acoustic Collective and Wood, Wilson & Carthy. Key to all these projects is Wood’s undying love for traditional English dance music. He is, if you like, the keeper of the flame passed on by the likes of Ashley Hutchings.

Although he is a gifted fiddle, viola and guitar player, it is as a singer-songwriter that Wood truly excels. Claims that he is the greatest living English songwriter are not that far fetched, but it is a pity that much of his work gets overlooked outside folk circles simply because of an underlying prejudice against the genre.

Albion: An Anthology collects 21 tracks from various solo/duo albums and other projects, notably his contribution to Simon Emmerson‘s wonderful Imagined Village album. There is also one unreleased song The Farmer thrown in for good measure.

Opening track The Shouter encapsulates all that is great about Wood’s songwriting. Based (according to the liner notes) on a traditional Sufi song about a traveller turning up at a village to tell his stories, the protagonist is ignored by the busy villagers for “25 years”. He continues to plough his lonely furrow over the years because he does not want to turn into one of the villagers, to busy with their work to appreciate the nature of art. Maybe Wood imagines he is like the protagonist, holding the fort for what he believes in, although the appreciation in which he is held belies the argument. As a morality tales about art vs. commerce, however, the song is a little gem.

Each of the tracks on this compilation could earn a paragraph of its own in this review, such is the focus of Wood’s songwriting skills. Space limitations mean picking out a few stand-out tracks from the rich pickings.

The title track is a personal favourite. Written during the Thatcher era, it is a true story based on Wood finding a young man hanging from a tree while out walking with his son one morning. The restraint with which Wood relates the incidental detail (the parents watching their children play barely 100 yards away, dreaming of their futures) lends the track an insidious power that should be a lesson to other songwriters. Remember, this song was written in the era of such clumping morality tales as Belfast Child and Sunday Bloody Sunday.

Albion finally surfaced on 2005’s superb The Lark Descending, which is also the home to the peerless One In A Million (words by Hugh Lupton) and Walk This World, a curiously downbeat paean to the redeeming power of song.

Elsewhere, Wood proves he is not as rigid in adhering to tradition as some folk believe. I Feel A Smile Coming On and Down The Wagon Way indicate the influence that French folk and Quebecois material has long had on his music, while the discreet beats and Indian rhythms that percolate through Cold Haily Rainy Night (from Imagined Village) are a joy.

A self-effacing character who is genuinely bemused that people buy his records and turn up to his concerts, Chris Wood is one of our true living geniuses. Buy this record and then snap up his entire back catalogue. He’s that good.