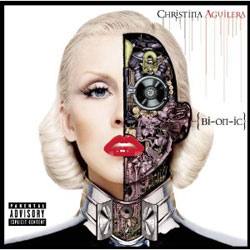 It’s odd to be contemplating how and where Christina Aguilera fits into the pop landscape in 2010. Odd because when she made the seemingly impossible leap from candy-coated ex-Disney Mouseketeer to barely-dressed sex powerhouse with Dirrty, it seemed the world was hers for the taking. Fast forward eight years and one indifferently received album – 2006’s Back To Basics – later, and the pop world has a new blonde-haired matriarch (and it’s not Madonna).

When early rumblings about the album that would become Bionic first appeared, Lady GaGa was still doing co-writes for other people. In that sense, revealing the audacious plans of having tracks produced by the likes of Le Tigre and Santigold sounded like a masterstroke. But since then, pop music has stepped up a gear and even arch-nemesis Britney Spears was indulging in harder-edged dance music with her Blackout album.

On paper Bionic sounds like it could be the forward-thinking, experimental pop album Aguilera wanted it to be. The guest list is stellar, with production from Switch, John Hill, Tricky Stewart, Polow da Don, Le Tigre and Ladytron, whilst co-writes are handled by Sia, Santigold, Cathy Dennis, M.I.A. and numerous others. Unfortunately, it’s fairly obvious that someone at some point got cold feet and felt the need to dump the majority of the more interesting stuff onto the Special Edition version (the main album has 18 tracks, the special version 24).

So for every clattering, beat-driven masterpiece such as Elastic Love (the M.I.A. co-write) you get the R&B-by-numbers of the crushingly disappointing first single, Not Myself Tonight. Opener Bionic sounds just like a Santigold track, which is no bad thing, especially when you compare it to Woohoo, which is about oral sex but is about as sexy as going to the dentist. Both Ladytron productions – the gorgeous Birds Of Prey and the lilting Little Dreamer – are bumped from the main album in favour of the Janet Jackson-esque Sex For Breakfast (as bad as it sounds) and the dated Glam.

Thankfully, three of the four Sia co-writes remain, making this the first Aguilera album where the ballads aren’t ruined by her tendency to cover all the notes on the scale, usually in the same breath. I Am is a lovely, simple ballad about personal empowerment, whilst You Lost Me could be this album’s Beautiful (Linda Perry does contribute another version of that song in all but name, but it’s typically cloying and clich�-ridden).

Bionic isn’t a bad album by any means. Aguilera has a fantastic voice, which, when used properly, can carry a song that would have otherwise been fairly ordinary (Prima Donna being just one example) and the production on most of the songs is exemplary. It’s just unfortunate that either Aguilera or her label didn’t have the balls to make a very brave and exciting pop record. It’s in there somewhere, you just have to find it. The question is whether people can be bothered now that Lady GaGa offers up eight track albums once a year with no filler.